Has Alabama Rot surfaced in the South Hams?

Dog owners of the South Hams have been worried this week by speculation that Alabama Rot may be in the area.

“It is extremely rare. Only 280 cases have been diagnosed since 2012 (which is when it was first recognised in the UK)

The first sign of the disease is usually skin lesions.  Usually, but not always, these are small, circular skin "wounds". They're usually on the legs rather than the body, and there are usually more than one.

Of course, there are loads of reasons for skin damage, and the massive majority of these are nothing to do with Alabama Rot, but it is obviously worth getting them checked out.

​In cases of Alabama Rot, the skin signs are followed within a few days by acute kidney injury, which can be fatal. The main signs of this are vomiting, lethargy and not wanting to eat. (And again, it's worth noting that lots of other, more common and less serious problems can cause these signs).  Anaemia and a lack of platelets (causing easy bruising) are other signs to look out for.

One upside of this timeframe is that if your dog has had skin issues for more than 10 days and is still well, you can be pretty certain the skin issues are nothing to do with Alabama Rot." 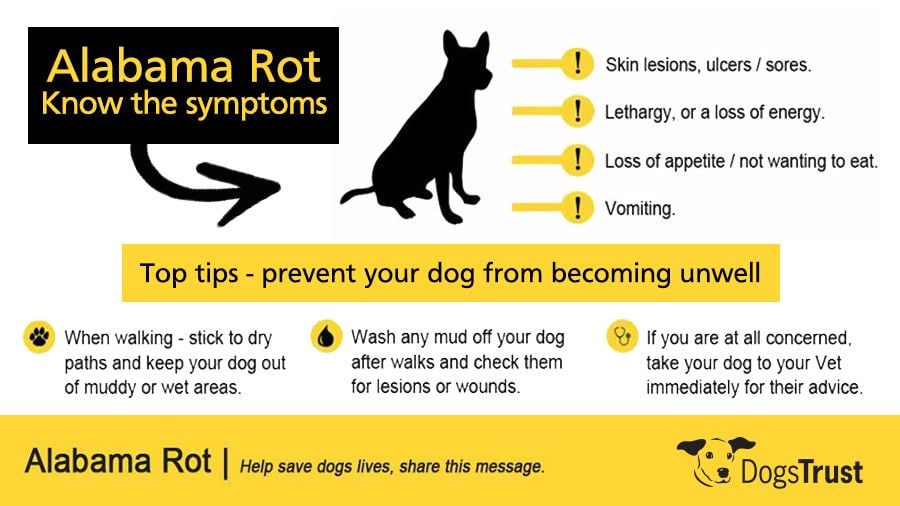 "There is no test for Alabama Rot - it can only be definitively diagnosed after death. Your vet can assess skin injuries and test for kidney disease though, if necessary, to make sure that Alabama Rot is not present.

It is a Winter-Spring problem. 90% of the cases confirmed so far have been between November and May.

We would advise dog owners to be alert, as always, but not to panic. We’re not aware that the case reported locally has been definitively confirmed as Alabama Rot. It remains a very rare disease and there's no evidence that walking in particular environments increases the risk”.