Did you see Dartmooor Horse Loggers down at Woodleigh Woods?

As the whole world moves forward towards the future, there are some things that will always be done best the “good-old-fashioned way” and one of those was on display in the South Hams this month.

Down at Woodleigh Woods for about a month, Dartmoor Horse Loggers have been hard at work, felling trees from the steep banks and using two beautiful heavy horses to take the timber off the hills and down to be stored. 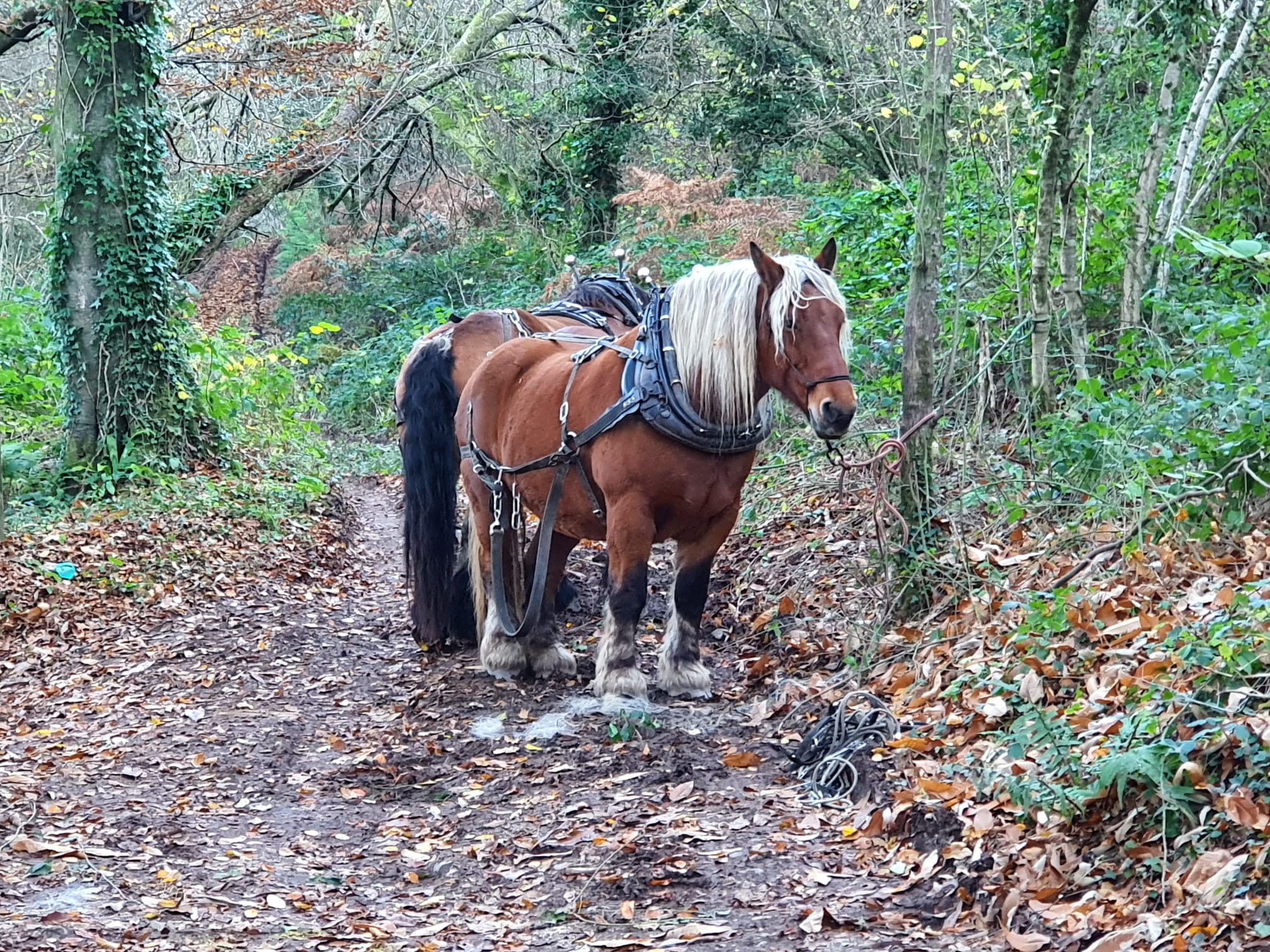 Will Hampton and Jordan Harris have been in Woodleigh with their two horses, an Ardenne called Polly and a Comtois called Beano. The Ardenne is one of the oldest breeds of draft horse, and, as their name implies, originates from the Ardennes area, while the Comtois is a slightly lighter breed originating in the Belgian-French borders.

Jordan explained that the horses had been working together for six or seven years, Polly in charge, and usually take it in turns to pull logs while the other rests, although they are capable of pulling together. 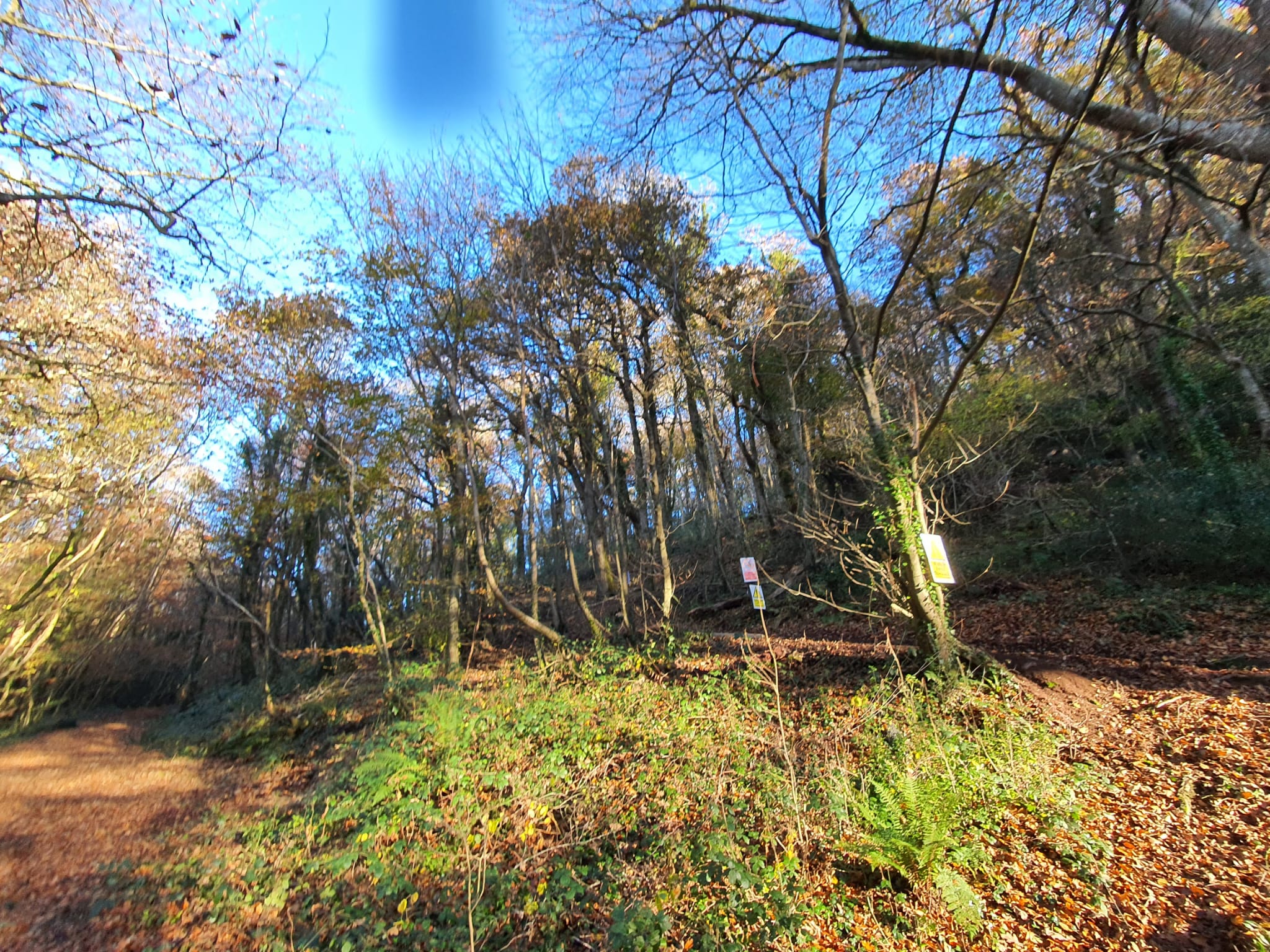 The work has been commissioned by the Woodland Trust, who manage that bit of the wood along the old Primrose Railway line.

Will explained: “This should be all an oak woodland, but but over time sycamore and beech colonised the wood. Because they grow much faster than oak you end up with a beech and sycamore wood with a hazel understory and Beech itself creates a lot of shade so not much else can grow successfully.

“We’ve gone in and taken out the beech and sycamore, thinning out the wood on the hills and given everything a bit more space and light to grow back.”

Using the horses to take out the wood is not only the most low impact way of removing it, but also the easiest. The team had one very small digger with them but it is scuppered with most of the gradients and undulating ground, whereas Polly and Beano don’t bat an eyelid. Each horse weighs about 800-900kg and can pull up to 500kg of timber, up to 12.5m long without breaking a sweat. 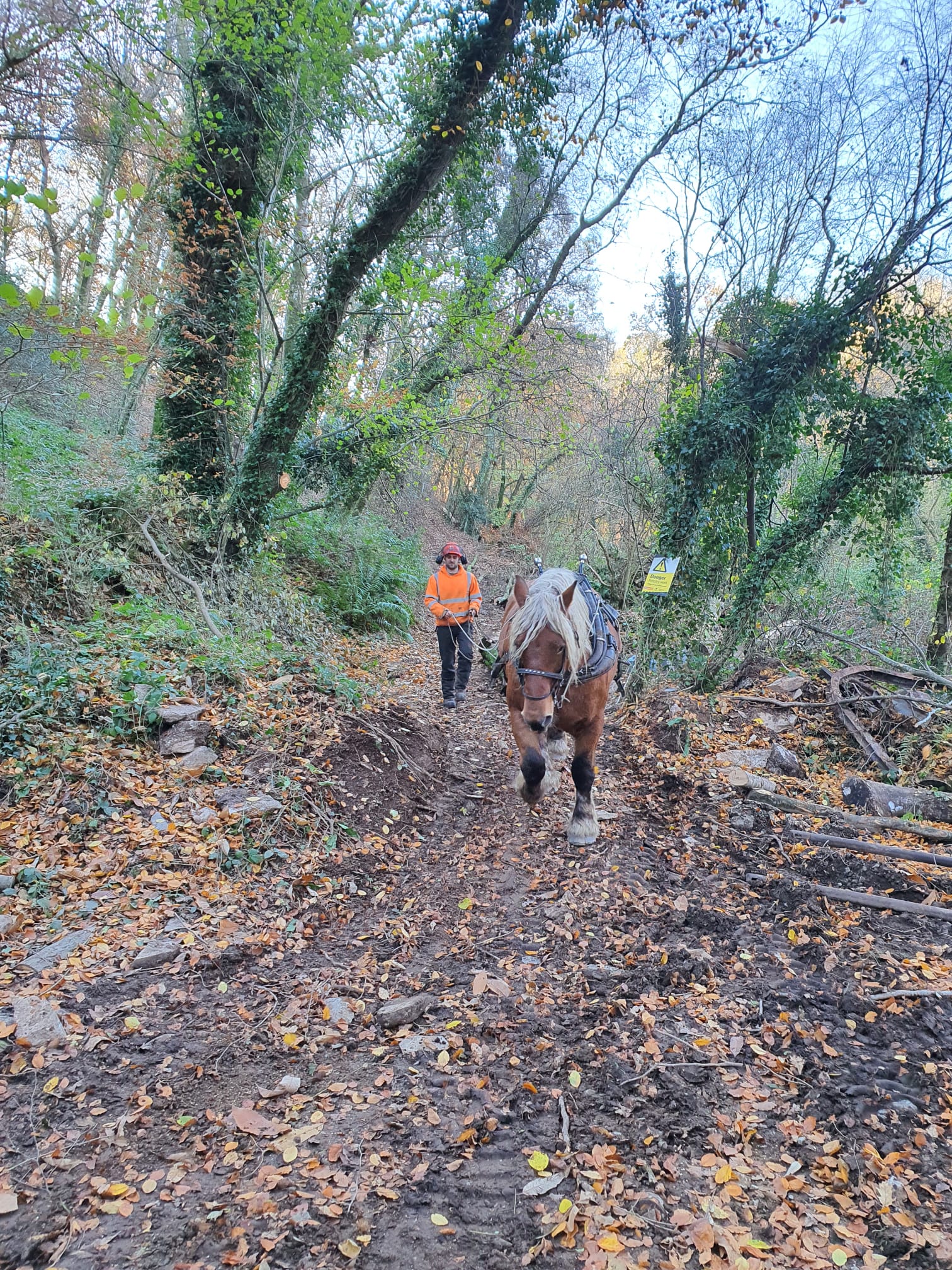 Will working with Beano

It’s also not the first time that horses have been used to manage the woodland at Woodleigh. Both Jordan and Will said they had noticed looped tracks up on the hillside that had been created by horses over the millennia being used to transport timber, and other things, through the woods.

Will said: “We know they had Ardennes horses connected to the Monastery at Wood Barton, which housed Cistercian monks who brought the horses over from France.”

The equipment they use is also pretty traditional, using a ‘whippletree’ which is basically a piece of equipment invented hundreds of years ago and is very unlikely to be improved upon for the next thousand. A simple construction of a bar and a pivot, it creates an even pull across the horses as they lean into the harness, but it is also used for windscreen wipers, telescopes and mechanical analogue computers.

The harnesses Polly and Beano wear are actually created in Armish Country, USA, and shipped over here to be sold across the country.

Paul Allen, Woodland Trust site manager: “It is great to be able to work with Will and his horses here at Woodleigh. These woods are known for their incredible bluebells but without management they’d get shaded out, so we do need to fell some of these trees.

“As you can see, the steep slopes make it really tricky so horse logging is the best approach, and it has the least impact on the soil and plants, fungi and insects that are a really important part of the woodland habitat. The horses, big though they are, create less compaction and potential damage. This is really important on ancient woodland sites, which are an increasingly rare and threatened habitat.

“We are using horses to help with our woodland management more and more at the Woodland Trust, particularly in wooded valleys like here, and where we have important archaeology or features like old boundary walls that need protection.

"Much of our restoration work here has been funded thanks to players of People’s Postcode Lottery.”

Currently if you walk in the woods you will see two large timber stacks, these are waiting to be picked up and transported to a local wood merchant who will then sell it for firewood, so you might end up with some Woodleigh wood in your own living room at some point in the future! 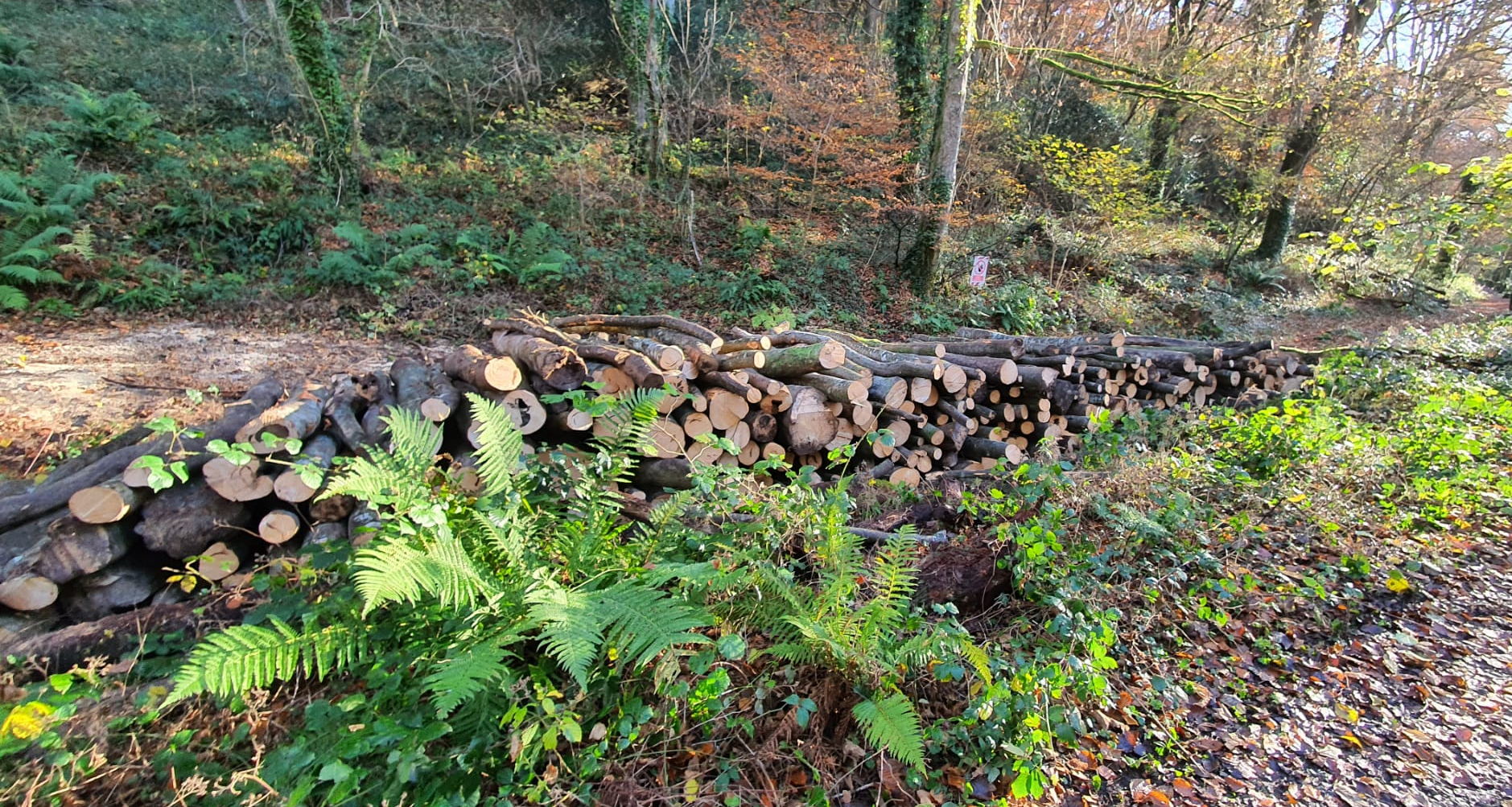