A plan to put double yellow lines on the road in Saffron Park, as well as other roads in Kingsbridge, has been put on hold.

We were contacted by Saffron Park resident Shannon Stark, who said "all of my neighbours are angry about it" and said they weren't given proper warning about the plans.

She said: "Myself and my neighbours are fighting a bit of a war at the moment with the town council and Devon Highways. They are putting double yellow lines outside our houses up the top of Saffron Park and we have only just been notified this week, with a sign outside and the works [are] being done Monday 28th."

She said the changes to the double yellow lines all stems from "one complaint about parking two years ago" and when she complained she was told their was a sign put up in September 2019 informing residents of the plans and that is when they could have objected. Shannon says that no sign was ever seen by her or her neighbours.

Shannon said that there is problems with parking on the road but "not where they're putting the double yellow lines".

She said: "All of my neighbours are angry about it and yes we have drives but can only fit one car on them and we all have two cars. Me and my husband both work from home so our cars are there nearly all day unless we go out, and I'm a childminder so I need easy access to my car to make it easier for me when I have children, and I use both cars.
"There is just no need for double yellow lines to be up the top of Saffron park they should be on the hill where the problems are, to be honest, single yellow lines would still piss us off, but at least we could park here at night."
A spokesperson for Kingsbridge Town Council confirmed that the plans now appear to be "on hold" while a "revised scheme being worked up".
They said: "One or more local residents contacted Devon County Council in late 2018 requesting parking restrictions/no waiting at any time i.e. double yellow lines at the junction of Saffron Park and Becketts Road. Kingsbridge Town Council supported further exploration of the proposal, alongside others, at a meeting with the County Hall Highways/Traffic Regulation Order officer in February 2019.
"Devon County Council agreed to take the matter forward at a subsequent South Hams HATOC meeting and notices were positioned in the locale and it featured in the public notices section in the Gazette.

"So this is a case of some people want it and some don't. However, my understanding is that DCC have put the proposals on hold with potentially a revised scheme to be worked up." 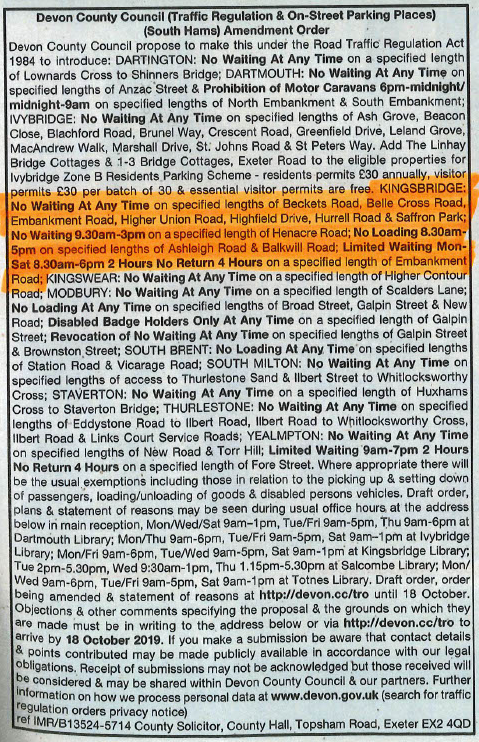 The Kingsbridge and Salcombe Gazette from the 27th November 2019 - notices

We have contacted Devon County Council for a comment but they have not yet responded. We will update this story as soon as we receive any.

1 comment
Yellow lines
June 29, 2021
Where on earth is everyone supposed to park especially in the summer when the car parks are full?
CT
Caroline trembath
Report this comment Comments (0) | Was this comment helpful? 0 0