Kingsbridge Running Day is back this year

The 14th Kingsbridge Running Day is coming to the town this month, giving you a chance to see the South Hams from classic and vintage buses.

In 2020 due to the Covid situation the organisers, the Thames Valley & Great Western Omnibus Trust, which is a registered charity, had to cancel plans for a public running day because of the restrictions on large gatherings but broadcast live on their social media a virtual running day.

This followed a journey from Kingsbridge to Dartmouth undertaken by the trustees in a former Western National 1960 Bristol FLF double deck bus to celebrate 60 years since it entered service. Some 8,500 people have viewed the footage in total more than 11,500 times. 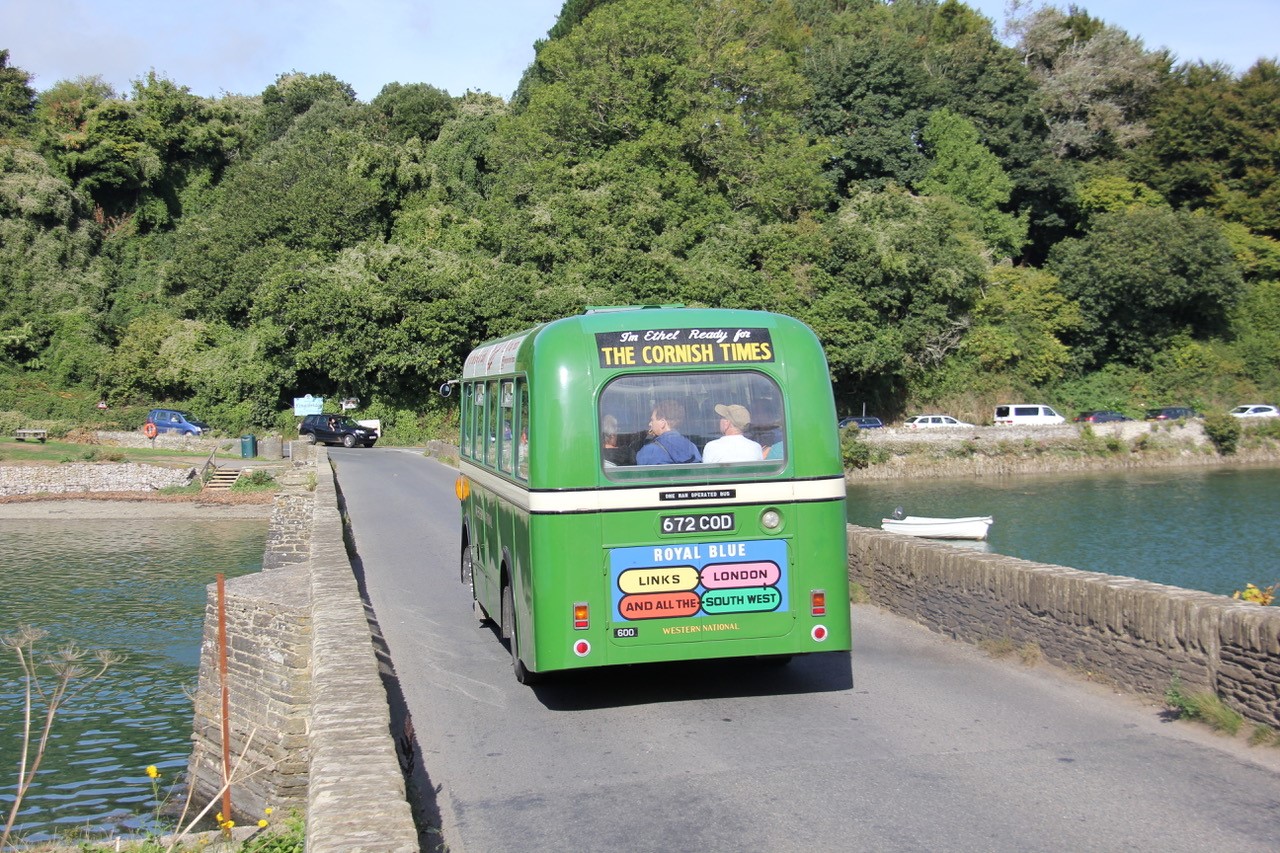 The Running Day is also celebrating the 60th anniversary (in 2020) of the Bristol SU type of small country bus, ideally suited to the South Hams terrain and its narrow lanes. Western National No. 600 was the first of its type and was initially based at Totnes for some 2 years before moving further west to Penzance for a further 10 years’ service. 600 is seen during the 2018 Running Day passing over New Bridge which spans Bowcombe Creek near Kingsbridge.

This year's event will start a little later than usual at 11am in order to accommodate the earlier inauguration by our MP Anthony Mangnall of the new 164 through service Totnes – Kingsbridge – Salcombe, which is being operated 7 days a week by Tally Ho Coaches, the principal sponsors of the Vintage Bus Running Day.

It is understood that the Mayors of Kingsbridge, Salcombe and Totnes will also be in attendance. The 164 is timed to give good connections with arrivals and departures of Great Western Railway trains to and from London and is part funded by Devon County Council and GWR.

In view of the later start, heritage bus services will continue later with last returns on the Running Day routes timed before 6pm to connect to the return feeder service to Totnes departing at 6.05pm. Full timings of the feeder services from and to Totnes are given on the Trust’s website http://www.tvagwot.org.uk/event-kingsbridge2021.htm 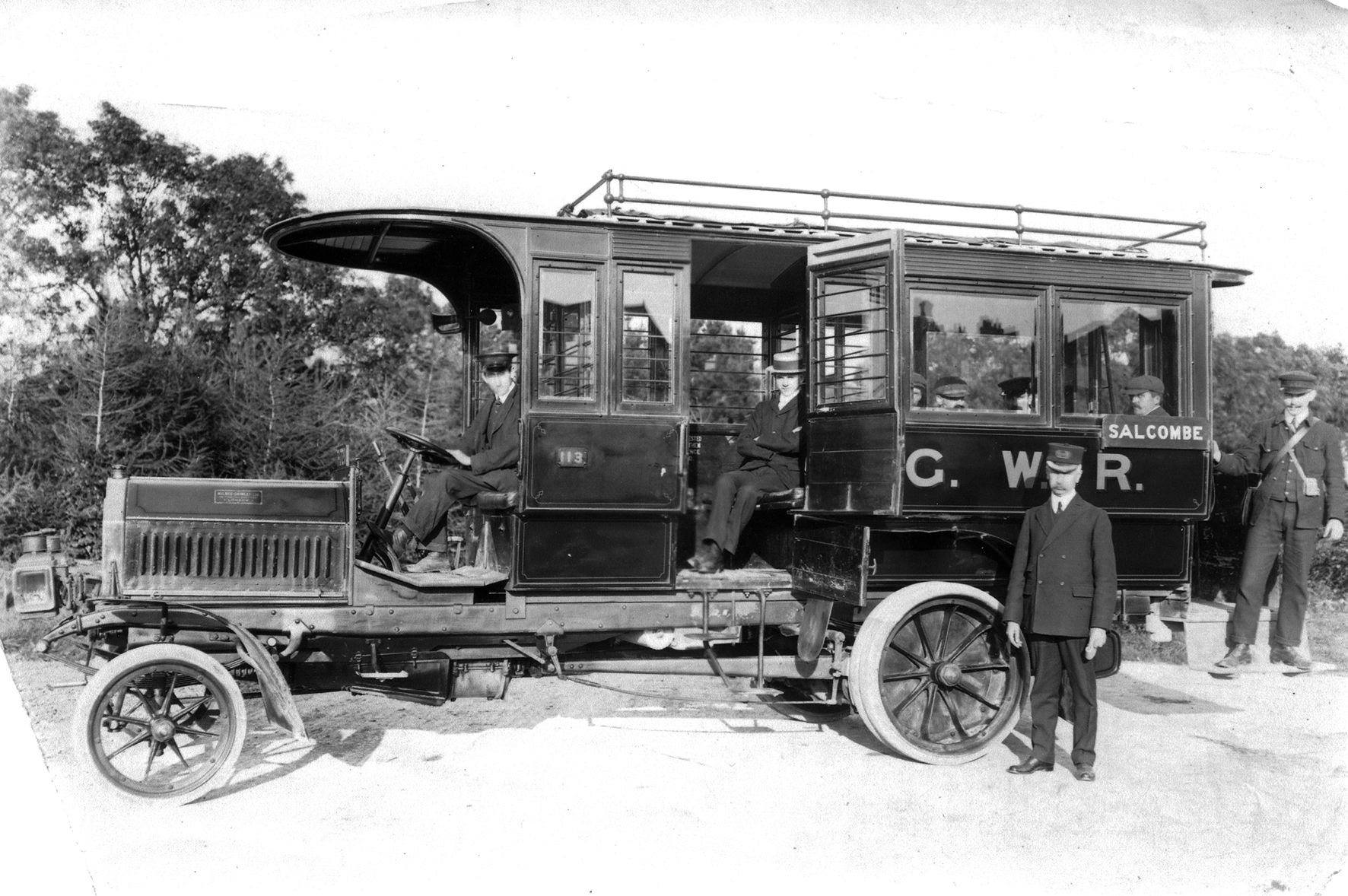 The very first GWR bus service from Kingsbridge was to Salcombe on 12th July 1909. This Milnes Daimler with crew and local passengers operated this first service. The Salcombe service has been run continuously ever since.

This year the running day will follow the traditional format with a few changes to recognise the increased traffic levels created by the greater numbers of ‘staycationers’ visiting the West Country. There will be fewer services using the narrower routes but a greater number of shorter journeys with a significant increase in the number of duplicated services so that more capacity will be provided to facilitate social distancing on board.

The organisers have advised vehicle entrants to operate with a maximum seat utilisation of around 50 percent, to ask travellers to wear masks on board and to keep side ventilation windows open to improve circulation of fresh air. They ask that all those coming to Kingsbridge to travel on the buses respect the wishes of the vehicle owners in observing these sensible precautions and keeping everyone safe.

All services are free and there is no limit to the number of journeys you can take during the day. From the buses you will be able to see sights normally hidden by the high banks and hedgerows of Devon lanes and really appreciate the beauty of the South Hams at first hand. 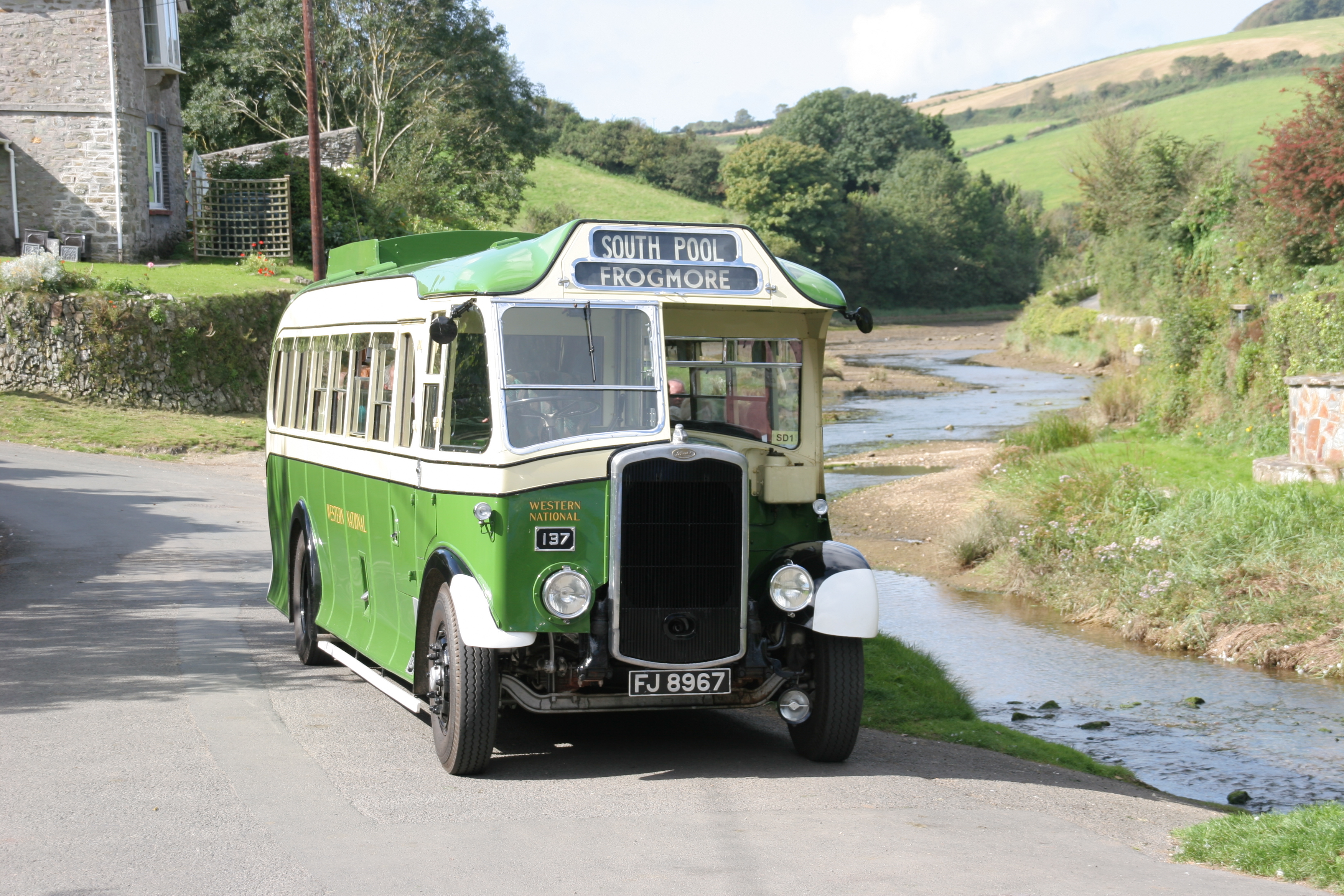 The oldest vehicle at this year’s event, Western National No. 137, the sole surviving Bristol H built in 1933 and rebodied with a Bristol body in 1942 also seen at South Pool, this picture by the end of the creek off the Kingsbridge Estuary. It has become a tradition that 137 and 333 meet at South Pool at each Kingsbridge event. 137 was also based at Kingsbridge depot when in service. Owned and restored by TV&GWOT Chairman Colin Billington.

Had the Running Day gone ahead last year it would have been celebrating two major anniversaries which this year will be celebrated as ‘+1’ events:

The Centenary of the registration of the National Omnibus & Transport Company Ltd which in 1929 came together with the Great Western Railway to form the well-remembered Western National which in the Kingsbridge area was based on GWR established motorbus services, the first being the Salcombe route running continuously from 1909.

The 60th anniversary of the small country bus the Bristol SU introduced in 1960 and running until 1972 when the Kingsbridge bus depot closed. The peak number of SU type vehicles during this period was nine and the organisers expect to equal this number at this year’s running day. There will be a special exhibition, changing throughout the day, at the former Western National bus depot building in Derby Road. 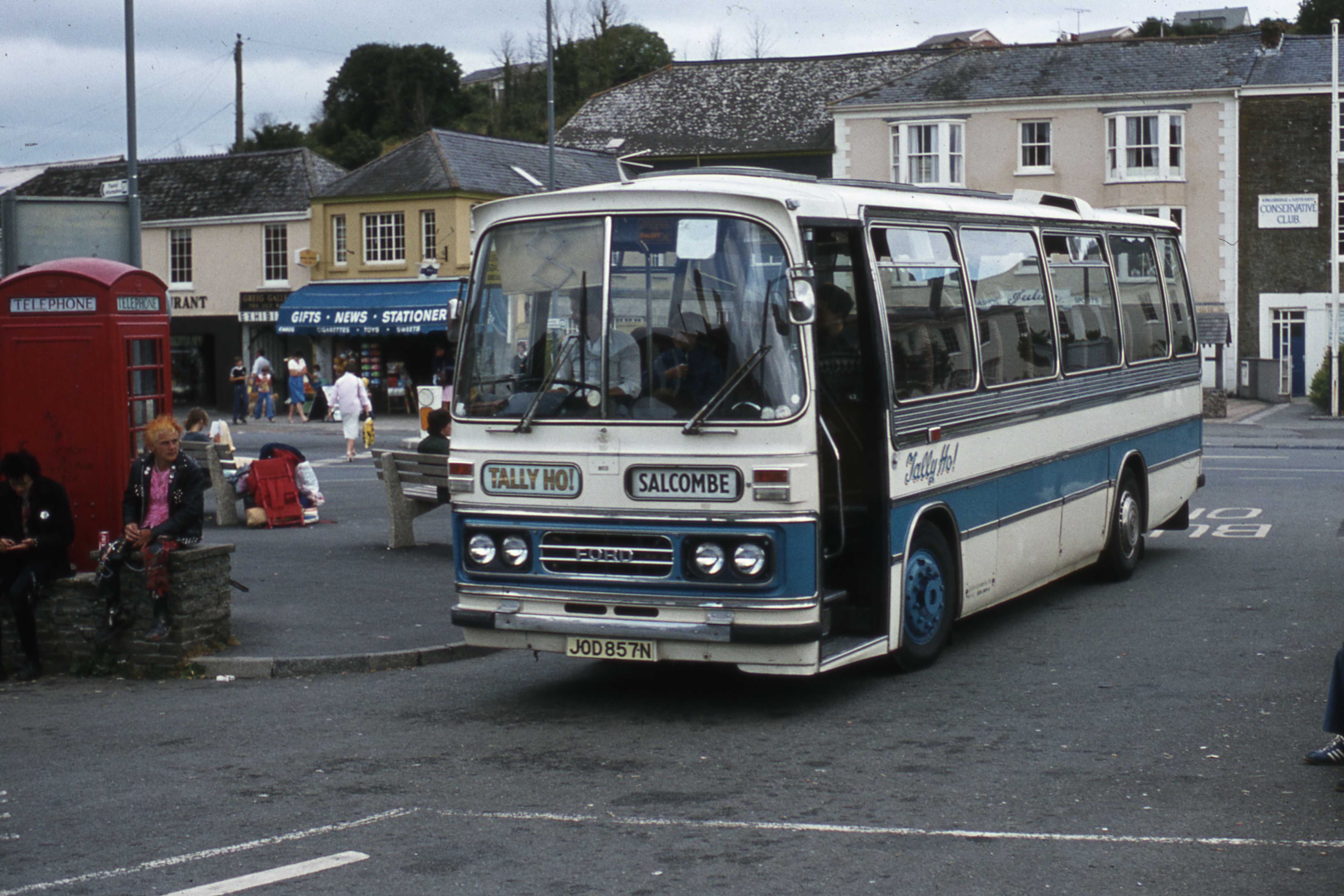 Tally Ho started operating the Salcombe service as their 606 alongside incumbent operator Western National in 1981. This is a Duple bodied Ford R1014 coach, new to Tally Ho, entering Kingsbridge Bus Station on 20th August 1981 to load passengers for Salcombe shortly after Tally Ho started their service.

To mark these anniversaries this year’s event programmes’ feature articles cover both the history of the Salcombe route and the Bristol SU. To plan your day, programmes are available now from Kingsbridge Information Centre for £6, by post through the organisers’ website www.tvagwot.org.uk, or can be purchased in the bus station on the day.

Organiser Colin Billington, who has a home near Loddiswell, said: "The bumper programmes (52 pages) contain full details of the routes, timetables, the buses expected to attend and the journeys being carried out by each vehicle during the day. Programme sales will help to defray the organiser’s costs and provide much needed funds for its charitable activities so please support the Trust by buying one."

The Coleridge Community Bus, a volunteer run service for the area to the east and north of Kingsbridge has become a regular feature of the Running Day using their low floor easy access bus. The 2019 route via Beesands, Hallsands, Kellaton and Start Point with spectacular views of Start Bay and Slapton Sands, highly acclaimed by the 2019 passengers, will be repeated and extended to East Prawle and East Portlemouth and include opportunities to photograph the bus in these spectacular scenic surroundings. 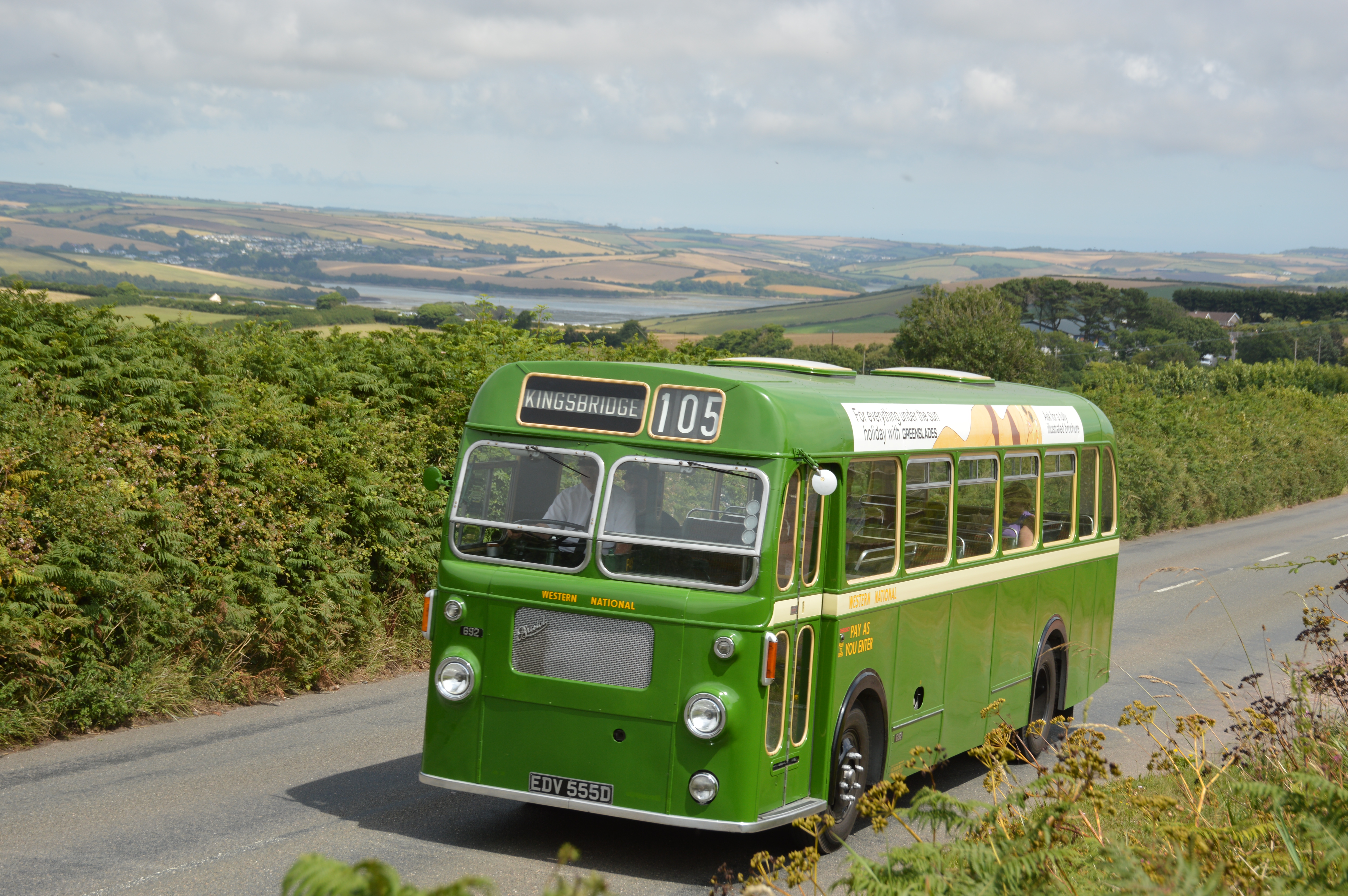 On the 110th anniversary of the commencement of the GWR service to Salcombe (12th July 2019) this is a Bristol SUL owned by Kingsbridge Vintage Bus Running Day organiser Colin Billington on a commemorative run approaching Malborough with the Kingsbridge Estuary in the background.

Luxury Coach Tours will run in both the morning and afternoon to the picturesque sheltered bay at Blackpool Sands.

Colin continued: “We are really pleased to be able to put on our Running Day again this year after our enforced absence in 2020. We are again very grateful for the backing of our principal sponsor, Kingsbridge’s own Tally Ho Coaches, who are supporting us in many ways behind the scenes.

"We are also grateful to the other bus companies and local businesses who have advertised in our programme again this year. All of the roads we are using are former or current bus routes and we are grateful to other road users for respecting the age and speed of our vehicles and kindly accommodating them.

"The event is for one day only and gives enormous pleasure to many people and benefits local businesses. It also demonstrates the environmental benefits to many people who may have not travelled before by bus and are encouraged to make greater use as a result of their Running Day experience”