Traditional grazing practices are helping to bring back traditional species

A local enterprise is helping to restore some of the biodiversity back into our local countryside with some unlikely helpers - cows.

‘Cows in Clover’ is a ‘conservation grazing’ enterprise run by Desley White and John Severn out of South Brent. They work alongside organisations such as the Woodland Trust, Devon Wildlife Trust and others to provide cows to graze areas of land.

Desley explained why large animal grazing is an important part of land management. She said: “Anyone with higher tier stewardship will have grazing written into their land management plan. The effects of large animals grazing areas of land are enormous. Not only do they change the structure of woodland by physically moving around, bashing through and creating pathways, but they have much more subtle effects too.

"Wherever they make an indent with their feet as they walk, they create a brand new, tiny habitat. A footprint can open up some space to let a seed germinate, or create an area for insects, which leads to a wider variety of species.

"Another thing is their dung, not only does it put nutrients back into the soil, but where its landed it will attract dung beetles, which will attract bats, which will attract birds etc. Birds will go through the dung to find insects and will spread the dung around and with it the nutrients." Desley went on to say that the cows won’t eat grass close to where they have pooed, so this creates areas of longer and shorter grass, which is important to encourage different species of insect and other animals that all need their own different niche in a habitat.

Animal grazing is an important part of looking after the land. Desley said: "So much of our wildlife in the UK is reliant on grassland and grazers. Traditionally we used to have a lot of wildflower meadows, now we are more likely to see just one species of grass planted in fields and fields. The old species' were much more supportive of the rest of the ecosystem."

Modern farming sees repeated cuts of grass for haylage too. Traditionally a hay meadow would be cut for hay once a year in June or July then the "aftermath" - grass that grows after that - would be used for grazing. This is after the flowers have bloomed and spread their seeds. Now we’re seeing fields cut for haylage and silage three times a year, starting in May. Really intense systems will see five cuts in a year, with massive amounts of fertiliser added to make that possible.

Desley said: "We’re trying to reproduce traditional ways to replenish traditional species of grasses. A lot of the people that Cows in Clover work with are individual landowners who have a field or two and want to do something good with it."

There is a momentum behind creating more meadows - in fact an initiative started on Dartmoor ‘More Meadows’ aims to create more.

Desley said: "You need to take the bulk of the grass away after the wildflowers have bloomed and seeded because if you leave it, it will rot, but if you just clear it away, you get poor soil - that's where the cows come in." 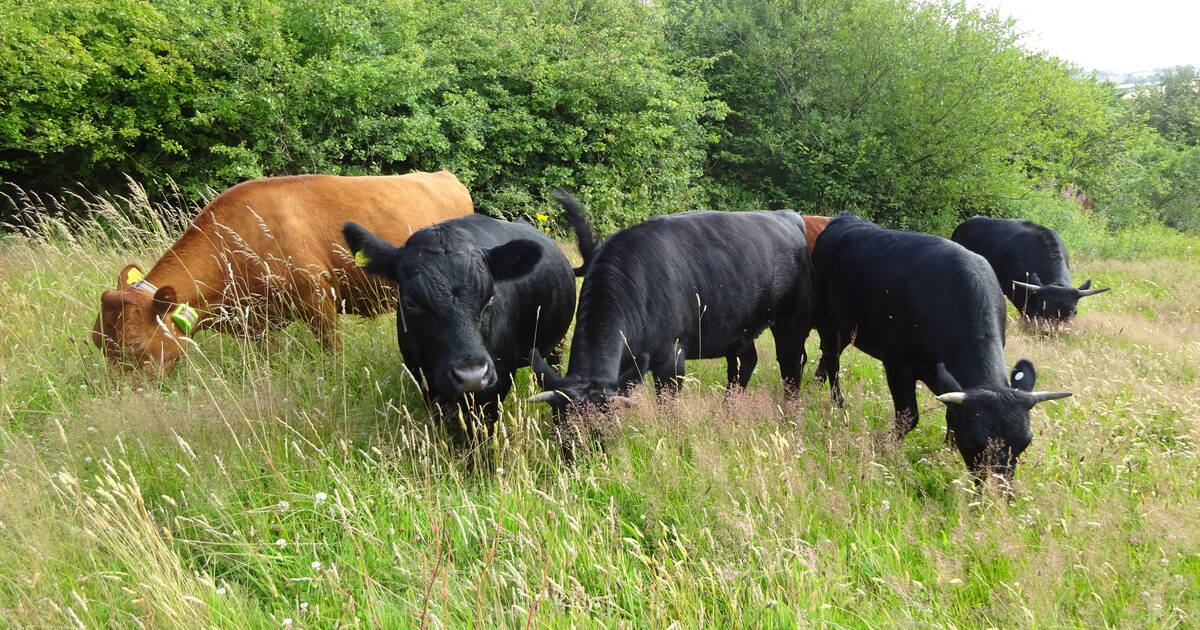 Starting five years ago with three cows, Cows in Clover now have a herd of 23 Dexter cattle, an old Southern Irish breed. “They’re a very old breed and they’re native so they’re fit, hardy, strong and can put up with a reasonably poor diet, not like the Friesians you see as dairy cows.

"Dexters are the smallest UK breed and some can have a gene mutation that makes them even smaller."

Six of their cows are currently grazing at Woodleigh Woods. Because there is a footpath through the fields and people are likely to be there walking or exercising their dogs, Desley has chosen individuals she knows to be “steady” and “good with people”. Some cows get nervous if you move them from a field to a woodland as there is no obvious boundary, so each cow is chosen for its environment. If you interact with them regularly enough they will come to know you.

The herd at Woodleigh are wearing GPS trackers, which you can find a link to HERE. “We put them on so we can find them", said Desley. "Sometimes they’re in a huge area so we want to be able to find them quickly. The Woodland Trust really liked the idea because people can find out where they are, either to spot them, or avoid them if either they or their dog are not too keen on cows."

The cows can be very friendly, but they're still large herd animals and you must always be careful around them, and don't annoy them. 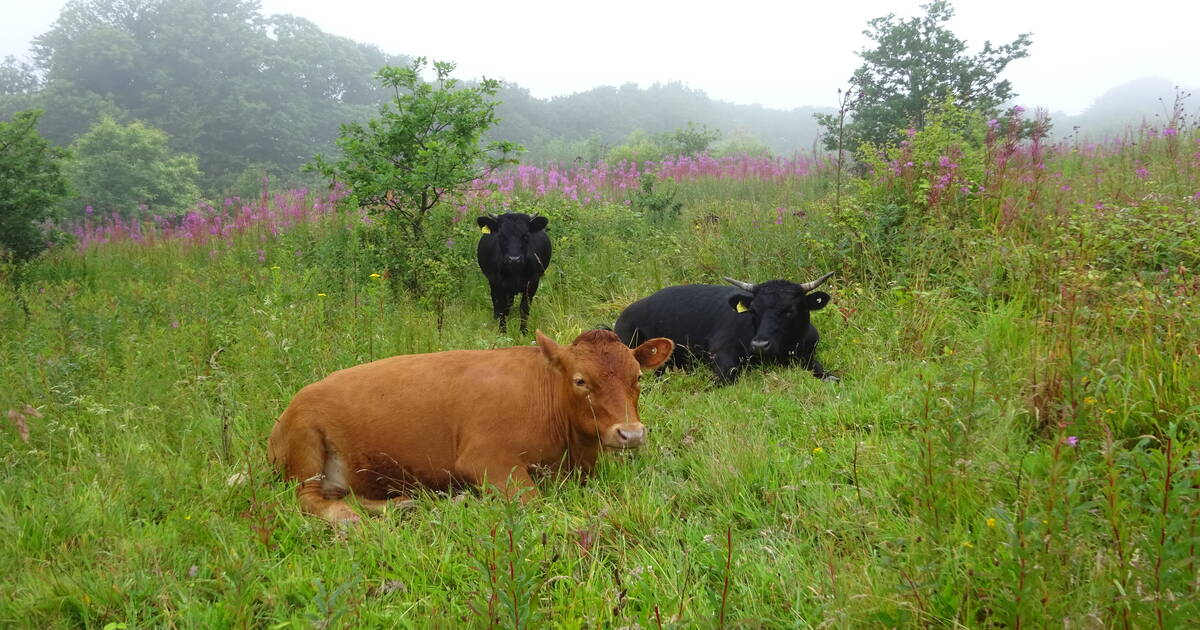 They also get date feedback from the collars and can see where the cows go, the areas they spend time in and can help to show any changes in the area.

Desley continued: "With Woodleigh Woods being a 'millennial wood', it has only existed for two decades and because it's new it doesn't have the dimensions that more mature woods would have, and that’s what the grazing cattle gives them.

Conservation grazing fits into the larger conversation about 'rewilding', which is basically allowing large swathes of the environment to be returned to its natural state and being able to sustain itself again. This often requires the reintroduction of species once native to an area. If you would like to learn more about it and its affects on climate change, check out Rewilding Britain.

Cows in Clover move their small herds around within ten miles of South Brent. They currently have cows at Woodleigh Woods and South Efford Marsh in Aveton Gifford.

Sounds like a great life for the cows too? Desley said: "They love it, they have all the space and especially at South Efford at the moment, because it is a nature reserve and people aren’t allowed in, there is a larger herd and they will spend the whole summer there. We will put a bull in with them for a couple of weeks and then we should have some calves next year."

All together last year, Cows in Clover grazed 185 acres with 23 cattle, over 15 sites and with 19 grazes. Desley said: "We're getting bigger and bigger all the time, just through word of mouth. It means we can have more cows than we have the land for (we own 4.5 acres and rent 8.5 acres for the young stock and calves) and it just about pays its own way. Its a form of community grazing - and we have recently taken on a new area near Blackawton, which is land owned collectively by the community.