Leaf It Out - Waste Management company

Leaf it out offers a wide range of waste management and rubbish removal services t...

Twenty20taxis is an established licensed taxi company with a variety of vehicles c...
Featured

The Loft is a licensed bar and restaurant in the centre of Kingsbridge in the Sout...

Based near Kingsbridge, South Devon, on the Kingsbridge to Dartmouth coastal road....
Featured

Leaf It Out - Waste Management company

Leaf it out offers a wide range of waste management and rubbish removal services t...
Featured

Woman left in tears after confrontation over disabled parking spaces

A young woman with a rare progressive genetic disorder says she was left “in tears” after a confrontation with a man who parked his campervan across all the disabled parking spaces in a supermarket car park.

Dartmouth resident Georgie Cranfield, 23, took to social media after the altercation with the man who had parked his campervan across “all the disabled bays” in the Lidl car park in her hometown.

She said that he didn’t have a blue badge, and his parking across the bays prevented anyone parking there, including herself and her dad. Georgie has a blue badge due to the fact she suffers from muscular dystrophy limb girdle, a rare progressive genetic disorder that will gradually get worse as she gets older. 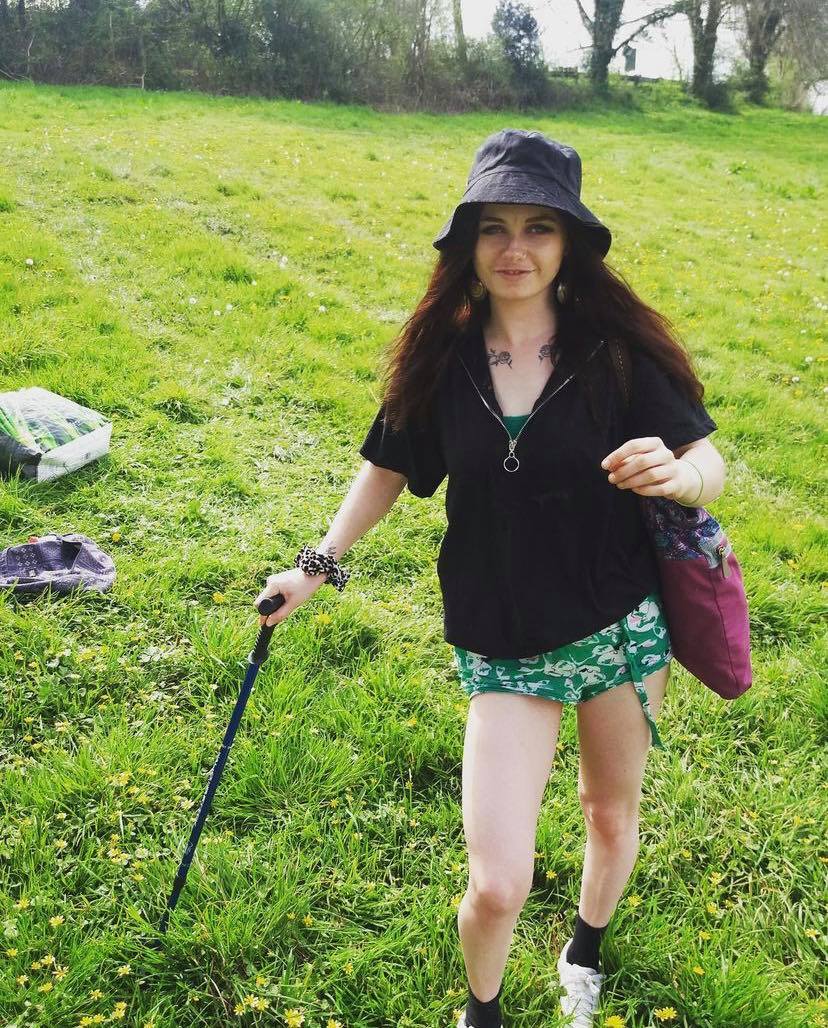 She wrote: “My dad asked the man to move but he said he didn’t care and will park anywhere he wants because getting a ticket doesn’t bother him because it’s just ‘money’ which he clearly had.

“He carried on by abusing my dad, calling him a weirdo…I decided to go over to talk to the man which resulted in him calling me a ‘crack head’ because I don’t look very well and [he said] that there was nothing even wrong with me and I was ‘faking’ my condition.

“He continued to laugh in my face because I was upset that I was discriminated [against] in front of so many people.

“I struggle daily dealing with my health and self esteem and being spoken to like this has resulted in me leaving Lidl in tears. Please watch out for this horrible man who cares about no one but himself, who wants to continue parking wherever he wants because he ‘can’.”

The man, David, who deanonymised himself on the public Facebook group ‘Items for Sale in Dartmouth’, where Georgie posted, wrote his own response to the situation, saying that he did park across the disabled parking spaces because “I went into the shop and didn’t want my JetSki stolen off the back of the camper”. 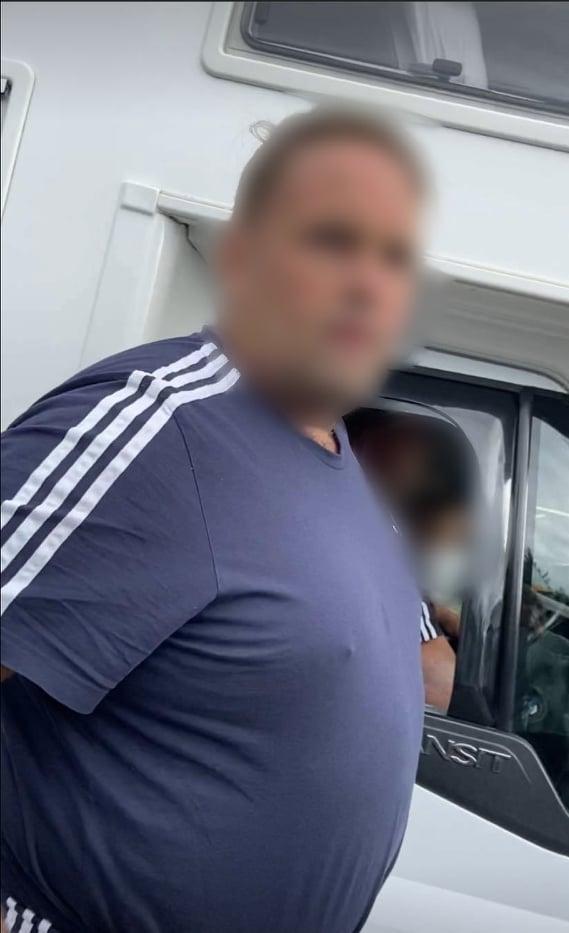 A photo Georgie took of David during the altercation

He wrote: “the daughter came out like a frog marching soldier clearly she was under the influence of some sort of drug and the mother also manhandled me yes I did call her a crackhead and I did call her dad a weirdo but after I took lots of abuse these people also ton the girl’s Facebook status she looks very capable and does not require a blue badge or a walking stick.

“She is clearly on drugs so she is spending her benefit money on drugs and also driving round in a taxpayer's car pleading she’s got some sort of condition but in your Facebook photos it clearly shows that you are quite capable [of] rock climbing. Please remember there are two sides to every story.”

This statement did not gain him the sympathy he was expecting from people in the group, with many pointing out that whether Georgie was disabled or not, not wanting to have a jetski stolen is not a reason to park in disabled parking spaces.

Dannii said: “At the end of the day it's a disabled parking space. Not a jetski parking space. Regardless of how ‘disabled’ people think the op [original poster] was, it was a space he shouldn't [have] been in.”

Charlie said: “Absolutely baffled how many people are trying to advocate any kind of abuse toward a disabled young girl, ‘you seem to be able to dance and rock climb’ so what because she’s disabled she has no right to try and power through and find joy in her life?”

Although there are many reasons why people qualify for a blue badge (including hidden disabilities such as anxiety disorders or a brain injury) and people do not need to ‘look disabled’ to be legitimately in use of them, Georgie did explain that her condition is deteriorating and she used to be “very active” before she was diagnosed at the age of 13 and her condition has worsened in the last three years.

She said: “I struggle to walk so I use a walking stick and fall over frequently. I take medication for it daily. My condition will gradually get worse as I get older so I’m trying to adapt to a different life as I used to be a very active girl. I was the third fastest sprinter in Devon when I was 11 years old. I try and stay as positive as I can and take every day as it comes!”

Georgie said that while the whole situation has “shook me up” she is “so grateful for the support I’ve had off the locals!”, many of them who jumped to her defence on her Facebook post.

Adam said: “It’s amazing how many people would rather doubt this girl has any disabilities than have a go at the selfish w****r that thinks he deserves more rights than others. Pretty f*****g sad how society is these days. Disgusting behaviour.”

We have reached out to David via Facebook but have not had a reply at the time of going to press.

To find out more about the Blue Badge scheme, visit the Government website HERE.

1 comment
Steve
August 20, 2021
Doesn't look the healthiest of specimens himself no doubt he'll be begging for a blue badge of his own and struggling to walk before he knows it.
S
Steven
Report this comment Comments (0) | Was this comment helpful? 0 0

Do you have a neighbour who deserves recognition?
Category: General News
With just under two weeks left to nominate, people across the UK are invited to participate in our annual hunt for the UK’s Neighbour...
Can you help identify this thing we found on the beach?
Category: General News
A weird thing has appeared on Leas Foot Beach in Thurlestone, which we would love to have a hand in identifying. ...
No brown bin collection until at least spring 2022
Category: General News
South Hams District Council has “reluctantly agreed” to continue the suspension of the garden waste collections until spring 2022.
Endeavour Boardstore has 20% off paddleboards and much, much more!
Category: Members' News
Now is the perfect time to pick up a paddleboard ready for next season, as Endeavour Boardstore has 20 percent off in their huge...
A record number of Devon children qualify for Free School Meals
Category: General News
A record number of children in Devon are receiving free school meal holiday vouchers for October half term.
More than £13.5m paid out to South Hams second home owners during the pandemic
Category: General News
More than £13,500,000 has been handed over to second home owners in the South Hams during the pandemic.
Featured

The Loft is a licensed bar and restaurant in the centre of Kingsbridge in the Sout...

Fine Shine Ltd
5.0
MW Mollie Wilson
"Booked my car in with fine shine for an interior and exterior clean. Exceptional service and will defiantly use again!..."
Romy raises £400 for Children In Need with her original artwork
H Helen
"Amazing!!! Well done Romy!! Proud of you!! XXX "
N&K Edwards Ltd - Domestic Appliance Repair
5.0
AD Anthony Downes
"We can thoroughly recommend N&K - they are a very friendly company and communicate all of the way. Thank you..."
Leaf It Out - Waste Management company
5.0
LF Lucy Fleming
"James returned emails quickly and turned up when he said he would. I’d use him and his Cree again..."
Trucks too big as new Super Recycling system causes chaos across the South Hams
A Adrian
"The service or should I say “ total lack of service” is an absolute disgrace. Considering I’m paying 210.00 pounds..."
STG Engineering - Geotechnical Site Engineers
5.0
MM Mr Morris
"I have engaged Simon several times throughout a long redevelopment project and on every occasion his service has been exceptional...."
The Pickwick Inn
5.0
KP Ken Pollard
"Friendly atmosphere and welcoming. The food was first class and the portions more than ample and not overpriced. Definitely the..."
Man charged for "nonpayment" of parking charge, despite having proof
PD P Dickinson
"I had same issue - could prove we had paid this summer on credit card statement and they are not..."
Hamstone Storage - Dartmouth
5.0
AM Anthony May
"Fantastic service from Hamstorage , been using various other methods for my boat storage , but now Rheece has stepped..."
STG Engineering - Geotechnical Site Engineers
5.0
ML Mr. Longley
"Simon was contacted at short notice. He quickly assessed the requirements and, despite having an already high workload, produced..."
Neighbours roused sleeping residents as Stokenham fire took hold of the pub
NP Nigel Platt
"I would like to thank David, Craig, Ella, Phil and Cathy from the bottom of my heart for waking us..."
STG Engineering - Geotechnical Site Engineers
5.0
MR Michael Rhydderch
"Delighted to recommend Simon to anyone who needs a water percolation test / report. Very responsive and flexible and hard..."
Featured