'Magic Roundabout' causes drama in Dartmouth, but the characters may make a comeback

A new roundabout in Dartmouth, nicknamed the ‘Magic Roundabout’ has been causing issues for local people for months, from narrow roads, a wonky look and a peculiar traffic light system, the new name seems apt.

The roundabout was part of the Section 106 agreement with Baker Estates for planning permission for the new Little Cotton Farm development opposite the Sainsbury’s on Nelson Road.

Martin McGowan-Scanlon, a resident of Stoke Fleming, has been following the drama as it has unfolded. He said that the original design was taken to appeal that Baker Estates won, but they later changed it due to “disquiet in the town”.

When the roundabout was first being built, chaos ensued. Traffic tailed back for what seemed like miles due to traffic light issues and when residents looked at the western approach, it looked way too narrow to allow two vehicles to pass comfortably.

Martin said: “I think it was more the traffic light system. Baker Estates seemed so anxious to get the first few homes built that the roundabout was definitely an afterthought. The traffic chaos went on through the holiday period and caused a lot of traffic problems.

“This was exacerbated by the decision to change from the original design which was obviously not fit for purpose.”

This is where the nickname the “Magic Roundabout” grew from. Residents considered the roads to be too narrow and the corners to be too tight. Martin continued: “Obviously Baker Estates and Devon Highways agreed as the design was later changed to widen the approaches.

“The sloped design and raised part of the roundabout has already caused one accident [a trailer with hay bales being pulled by a tractor tipped over] and I fear more to come. It seems as if Baker Estates were so keen to put a wide sweeping lawn in front of their development that they forgot about the narrowness of the road.

The main issue, still obvious to anyone who drives around it, is the fact that it is very wonky, leaning up towards the new estate. 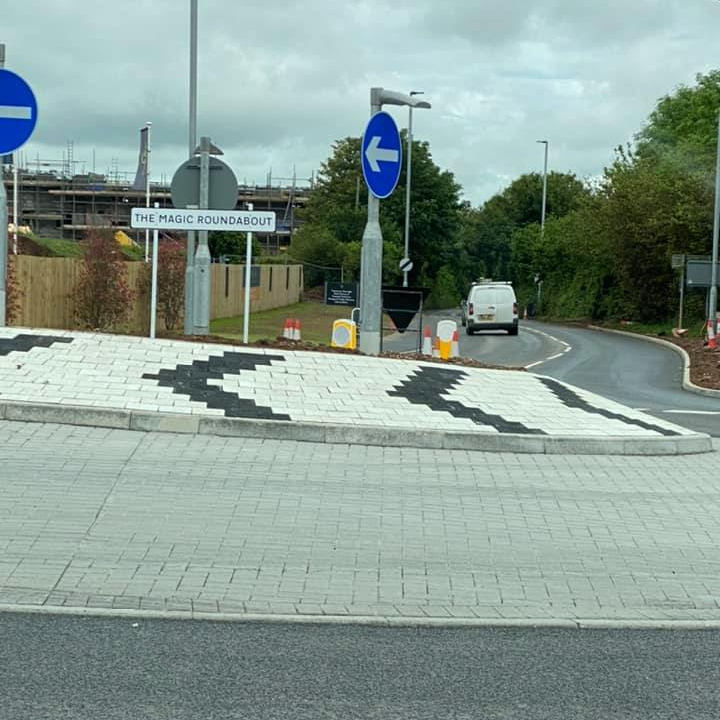 When asked whether there were any further plans to straighten it, a spokesperson for Baker Estates said that the designs had all been worked on and approved by Devon Highways.

A DCC spokesman said: “A road safety audit is being carried out. Once completed we will look at the results before we can determine our next step.”

The Magic Roundabout name soon caught on and Dougal and Zebedee arrived shortly afterward, albeit in soft toy form, but were soon removed. The a very official looking ‘MAGIC ROUNDABOUT’ sign arrived, which was also removed.

A spokesperson for Baker Estates said these were removed after a request from Devon Highways. Devon County Council has not confirmed this due to their on-going safety audit.

Martin said: “I think the name originally came from Jonathan Pope, a landlord in the town. Then the toys appeared and were subsequently kidnapped. The signs were never official and have again been removed by someone without a sense of humour.”

Dartmouth’s South Hams District and Devon County Councillor Jonathan Hawkins was asked about the Magic Roundabout saga and said: “I share concerns over the width of the lanes and the design, and have had a number of meetings on site with Bakers Estates and County Officers. Devon County is going to watch very carefully over the coming 12 months.

“And from those meeting changes where made speed and pedestrian safety obviously are paramount,
I understand it went to an independent safety panel and they supported Bakers Estates.

“The name Magic Roundabout I think is great and I know Dartmouth Green Partnership have plans to install characters on the roundabout in future I believe.”

In June, Graham Hutton, Development Director at Baker Estates, said: “The detailed design for the roundabout outside our development, at Little Cotton Farm in Dartmouth, was approved by the highway authority back in 2016 when the planning approval was first granted.

“Subsequently, after a number of safety audits, the highway authority issued technical approval setting out all of the construction requirements that its policies dictate. Baker Estates will always look to work collaboratively with the community, so when both the authority and local people expressed a desire for changes, we responded immediately.”

We will keep an eye out for any more Magic Roundabout related news!

All images courtesy of Martin McGowan-Scanlon.