The Met Office has announced an Amber alert weather warning for much of the south of the UK for the coming weekend.

The Amber warning, which has been issued for Sunday (17 July), highlights "likely adverse health effects" for the general public, not just those vulnerable to extreme heat.

A spokesperson for the Met Office said: "Temperatures could be in excess of 35ºC in the southeast, and more widely around 32ºC within the warning area. These high temperatures could extend into the early part of next week and an extension of the warning will be considered in the coming days." 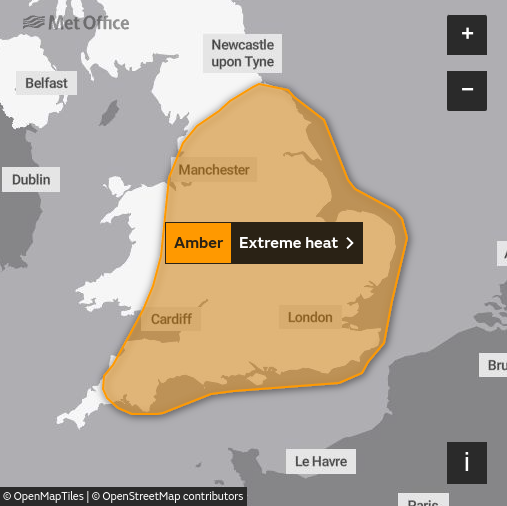 Dr Agostinho Sousa, Head of Extreme Events and Health Protection at UKHSA, said: “Heat-health alerts have now been issued to the majority of the country, with temperatures set to remain consistently high throughout the duration of this week.

“Most of us can enjoy the hot weather when it arrives, but it is important to keep yourself hydrated and to find shade where possible when UV rays are strongest, between 11am and 3pm.

“If you have vulnerable family, friends and neighbours, make sure they are aware of how they can keep themselves protected from the warm weather.’’.

Find out more about keeping cool in hot weather with WeatherReady from the Met Office.

Whilst a 1°C background temperature increase may not seem significant, the resulting increase in the severity of extreme heat events is already evident in the observed record. This has widespread and significant impacts.

Extreme heat events do occur within natural climate variation due to changes in global weather patterns. However, the increase in the frequency, duration, and intensity of these events over recent decades is clearly linked to the observed warming of the planet and can be attributed to human activity.

Dr Mark McCarthy is the head of the Met Office National Climate Information Centre. He said: “The highest temperatures experienced in the UK tend to occur when our weather is influenced by air masses from continental Europe or North Africa – as it will be at the weekend - there is already a strongly-embedded warming due to climate change across the continent, that is increasing the likelihood of challenging the existing UK temperature record.”

Kingsbridge Celebrated Christmas last weekend and it attracted hundreds of people
Category: Events News
Kingsbridge Celebrated Christmas in a big way last weekend as the town was full to bursting with people, and the town square was alive...
SHDC commits to net-zero carbon emissions by 2050 "at the latest"
Category: General News
South Hams District Council commits to the Devon Carbon Plan, with the aim of reaching "net-zero emissions by 2050 at the latest". ...
Fire destroys caravan, car and a temporary structure
Category: General News
A fire has destroyed a caravan, a car and a temporary structure in Yealmpton.
Orchard Cleaning and Laundry also have a laundrette - make sure to check it out!
Category: Members' News
Orchard Cleaning and Laundry not only have an excellent changeover and domestic cleaning service, but they also have a laundrette.
MISSING PERSON: A body has been found in the search for Giles Battye
Category: General News
A body has been located in the search for 47-year-old Giles Battye.
Local author publishes his first book
Category: General News
A local author has published his first book, based in the South Hams and it is set to inspire wonder in all who read...