The owner of a red fox Labrador called Rufus, who was rescued by the Coastguard last year after two days stuck on a cliff, has sent a message thanking them in their 200th anniversary year.

Rowan Boddington, from St Ives in Cambridgeshire, was on holiday in the Bolt Tail area with his girlfriend and had gone out for a walk along the coast path above Hope Cove when Rufus disappeared.

Rowan called the local Coastguard to report that he thought his dog had gone over the cliff.

Despite searching for hours with the help of the Prawle Point and Bigbury coastguard rescue teams, even returning the next day, there was no sign of Rufus and Rowan reluctantly made the decision to return home.

But two days later, a member of the public spotted Rufus sheltering on a ledge on the cliff face and called the Coastguard. Rescue teams from Prawle Point and Bigbury, along with RSPCA animal rescue officer Megan Higgins, attended the scene and Rufus was winched to safety.

Although thirsty, he was relatively unscathed, with just a few minor cuts on his face and paws. After a check over, Megan took Rufus to an RSPCA shelter near Exeter, where he was later reunited with Rowan. 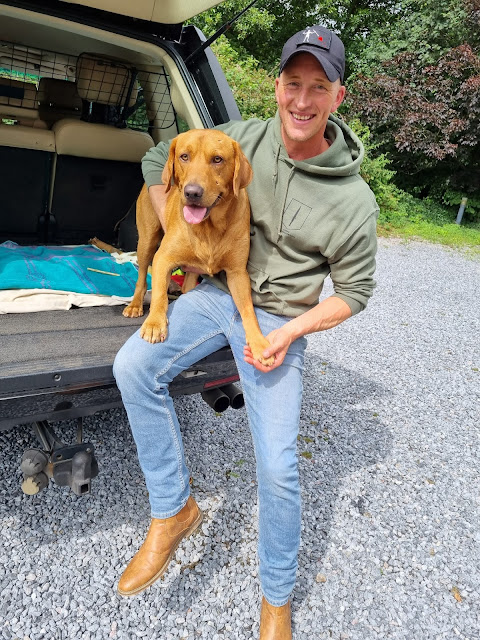 Rowan said: “I’m so grateful to the coastguard for the help, it’s greatly appreciated.

“The amazing community of Hope Cove were so important, they really stepped up to support me and help search; if it weren’t for them, he wouldn’t have been found.

“The coastguard arrived and they were a group of amazing guys who quickly got set up and abseiled over the cliff to get Rufus.

“We are eternally in your debt – thank you.” 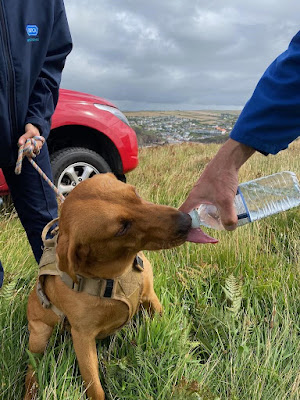 Drew Parkinson, coastal operations area commander, said: “We got the call from an understandably worried owner about his missing dog Rufus, he was really worried he’d gone over the cliff.

“We sent the Prawle and Bigbury Coastguard Rescue Teams, who carried out a search of the area, including a cliff edge inspection, but found nothing.

“We all feared for the worst. So to get a call two days later about a sighting and then to see Rufus was a heart-lifting moment for us all.

“Our two teams then worked really well together to set up the rope rescue equipment and allow our rope technician to descend the difficult terrain and reach Rufus.

“It was a uplifting end to what could have been a very sad story. We’re glad we were able to help.”