South Hams District Council have issued a temporary stop notice for the Lock's Hill development after work started "without some of the agreed conditions in place".

Members of the Save Lock's Hill group spotted machinery and vehicles moving around near the site, which is also called Garden Hill, on Monday, 10th May, with fencing being positioned around the footpath. There is a video that you can see on the Save Lock's Hill Facebook group here.

They raised concerns that a Construction Management Plan had not been submitted to South Hams District Council, something that is required before any kind of "site clearance, preparatory work or development" can take place.

By the 12th May, diggers had moved onto the site, tearing up the entrance way and pulling out hedges and vegetation. This raised concerns for nesting birds, of which the RSPB say: "We recommend avoiding hedge cutting during the main breeding season for nesting birds, which usually runs throughout March to August each year." 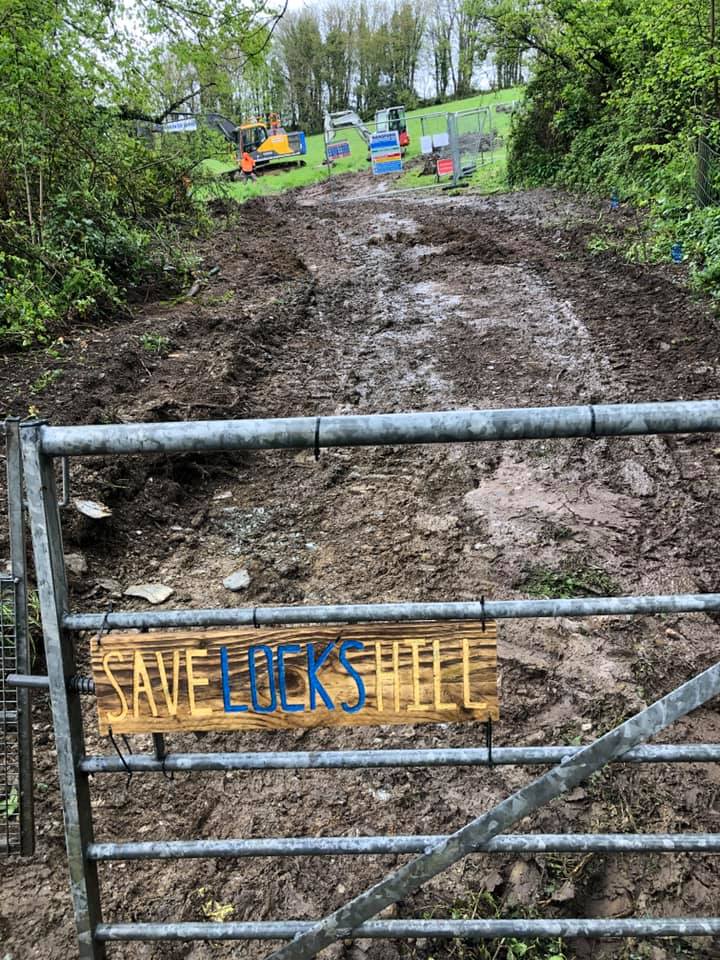 The entrance to the site - credit Emma Jones

On Friday, 14th May, South Hams District Council, following pressure from the Save Lock's Hill group and Cllr Julian Brazil, have served a Tree Preservation Order and a Temporary Stop Notice.

“When planning permission is granted there are often conditions which have to be met before work can start on site. Today South Hams District Council were made aware that preparatory work has started on the Garden Hill site without some of the agreed conditions in place. The temporary stop notice requires works on the site to now cease for 28 days, while the Council considers whether further action is necessary."

Dan Stathers, who started the group to try and stop the development at Lock's Hill, said: "The Lock’s Hill neighbourhood has been magnificent. We witnessed some heart-breaking scenes as hedgerows were being ripped out during nesting season, the situation was appalling - even the groundworkers (who should never have been put in that position in the first place) were really sad about what was going on. Thank goodness common sense prevailed and SHDC stepped in and put a stop order on the site. We now need comprehensive ecology surveys so the hill finally gets the hearing it deserves and the wildlife at last receives some compassion and respect."

Denise O'Callaghan, who worked to get the stop notice from the council, said: "Excellent work by the SHDC team - tree officer, planning officer and enforcement officer, and special thanks to Cllr Brazil for his support in pushing for a Stop Notice. And of course thanks to all of you for your passion and persistence!"

Blakesley Estates, who are running the site, disagree that works have commenced. A spokesperson said: "Blakesley Estates advised South Hams DC in writing some weeks ago that we would be undertaking trial pits and needed to protect the public with temporary fencing whilst doing so. The temporary fencing was erected this week to maintain the public right of way, and the trial pits were then undertaken with an Excavator.

"SHDC Planning dept then proceeded to report Blakesley to their planning Enforcement team, claiming that consented works had commenced, which they had not. Trial pits and safety fencing do not represent a start to the consented scheme and are not listed in the planning conditions.

"We also agreed with SHDC Trees officer that we would coppice trees rather than felling them. Felling several trees was permitted in the previously SHDC approved plans. The SHDC Tree officer agreed this approach, only to subsequently place a Tree Protection Order (TPO) across the whole site.

"Much has been written about a Construction Management Plan not being submitted by Blakesley. Firstly, construction has not commenced and secondly a draft plan has been submitted to SHDC for comment

"It was requested by Devon County Council Rights of Way representative that the public footpath was maintained and made safe. We then laid stone across the site entrance to provide a safe corridor through the site.

"The Devon CC Land Charge Drawing (below) shows the legal right of way for the Public footpath. This is the route that will be maintained by us during the duration of the works

"We urge SHDC to communicate and collaborate with us, (as Devon County Council has) to improve a scheme that has already been consented." 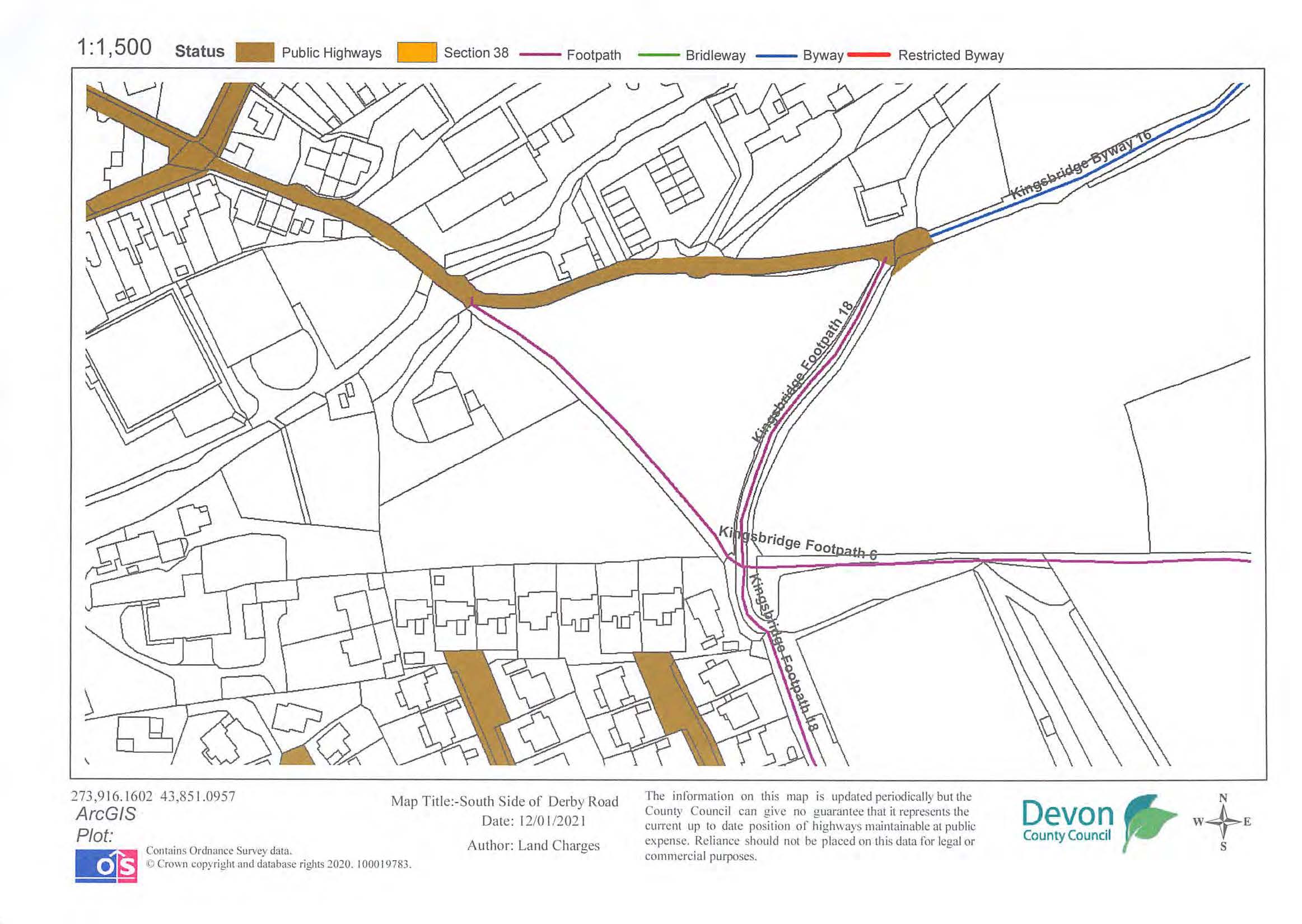 The location of the footpath - credit Blakesley Estates

2 comments
Mr.
May 18, 2021
The developer is making a mockery of of the planning rules by their actions. The planning document states that no site clearance or preparatory work can start yet. So the council are totally justified in making them stop. Blakesley estates should be ashamed of their actions and stop immediately.
LB
Lee Bonham
Report this comment Comments (0) | Was this comment helpful? 0 0
Despite Stop Notice - work goes on
May 17, 2021
Funnily enough, despite wanting to work with the local council, and locals, Blakesley Estates are working on the site again this afternoon. Videos have been posted of them clearing more hedges!
N
Nikki
Report this comment Comments (0) | Was this comment helpful? 0 0