Group started to try to save Lock's Hill from development

News that a potential site for housing in Kingsbridge has been sold has pushed local man Dan Stathers to try and save it from development.

Lock’s Hill, known locally as ‘Bag-a-Maize’, is the field between the Scout Hut on Derby Road, and Kingsbridge Rugby Club’s base at High House. It was originally added to a list of prospective development sites by Kingsbridge Town Council, calling it K4.

The site is incredibly steep, something that many Kingsbridge-ians know, especially if they’ve tried to walk down it after a few bevvies at the rugby club! In fact it has long been notorious for its steepness, and is even mentioned in the 1864 book ‘Kingsbridge Estuary: Rambles In The Neighbourhood’ by Sarah Prideaux Fox, where she says “...nor the still steeper field of Lox Hill, the shortcut to High House, which is literally so nearly perpendicular, that a false step might send you rolling back again to the stile at the bottom”.

Suspicions were raised that builders may soon be moving in after H2Land, the company that originally submitted a planning application for K4 in 2015, announced on their Facebook page on 1 March that they had sold the site. 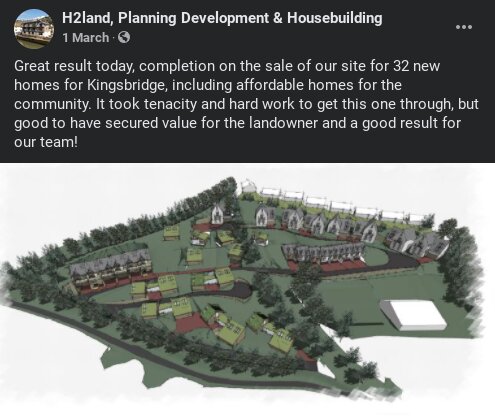 The social media post that alerted Dan to the land sale

That is when Dan started the Save Lock’s Hill: Hands of our Bag a Maize group. Dan said: “I set up the Facebook Campaign to alert people that a sale had been agreed, house builders could be about to swoop, and most importantly of all, what we could be about to lose.”

The development of 32 homes was originally rejected by South Hams District Council in June 2016, and Kingsbridge Town Council had previously withdrawn its support for the application after the affordable housing contribution dropped to just 12 per cent - falling a long way short of the council’s 55 per cent target for affordable homes.

But the developers, H2land, won their appeal against South Hams District Council at a hearing in March 2017. At the time, Cllr Julian Brazil said: “It’s an insult to the intelligence of local people. The whole community is against this development and local councillors have done everything in their powers to stop it.” while former mayor Chris Povey said the allowing of the vastly reduced amount of affordable housing was “setting a dangerous precedent”.

Since then it was pretty quiet, until this announcement of the sale of the site came at the beginning of the month.

Dan said: “I think most townsfolk assumed the K4 development was a non-starter because who would be barking enough to want to build on the steepest hill in Kingsbridge? The town council rejected it, the district council tried to see it off, but when the Planning Inspectorate waved it through on appeal we were all left gobsmacked! Now we’re on the verge of losing one of Kingsbridge’s last remaining wild spaces, a lovely old hill full of history and character and teeming with wildlife. It’s heart-breaking.

“We’re in the midst of an ecological crisis, so why are we tearing up precious greenfield sites? Lock’s Hill could be Kingsbridge’s very own nature reserve.”

Dan thinks that the surveys and reports about the K4 site are inaccurate too. He said: “Since news broke that Lock’s Hill had been sold on to a house-builder the group has been working hard to expose all the obvious pitfalls.

“The surveys and reports are packed with arbitrary nonsense; a traffic report that says there was ‘no personal injury accidents on Derby Road in the period 2011 – 2013’, a spreadsheet that says the last slow worm spotted within a one-kilometre radius of Lock’s Hill was in 2012, and a consultant having to be reminded that leaves fall off trees during Autumn.

“The ecology reports (which are now out of date) are fleeting. They recognise the potential of the habitat to attract rare and protected species but don’t state a case for preserving it. It’s all put together to support the developer, but who was defending the hill? I wish the Government Planning Inspector had knocked on a couple of Kingsbridge doors, she would have found out all she needed to know about the site in less than five minutes.”

Dan also believes that there are safety issues to consider when looking at the site for housing. He said: “There are a myriad of safety concerns surrounding the Lock’s Hill site entrance. It converges with the driveway leading to the scout hall and is adjacent to the rear entrance of the Recreation Ground which receives a constant flow of dog walkers, joggers and kids on bikes and scooters.

“It’s also on a blind bend directly opposite the way into Overleat Residential Care Home, not to mention all the ramblers who use Lock’s Hill Public Footpath. The road also happens to be the only access to the Devon Air Ambulance landing zone at Kingsbridge Rugby Football Club.…it’s all so flawed, you couldn’t make it up!

“Derby Road is just a lane, and a busy one at that. It barely copes as it is, so how is it going to manage under the weight of fully-laden dumper trucks making endless trips up and down its narrow passage?

“Talking about the road, will it have to be closed? And if so, will the house-builder be compensating all the Derby Road businesses for loss of earnings - particularly those tucked away further up the lane at Garden Mill Industrial Estate who appear, so far, to have been left in the dark?

“What about Overleat and its residents who should be enjoying some comfort during their twilight years, not waking up to the heavy clunk of pile driving? And what about the valley’s flooding issues which only a few years ago saw it return to a creek! Local people deserve answers to these questions.

“K4 is one of the most impudent developments ever to have set its sights on Kingsbridge. It’s nothing more than a vanity project; a small outfit of developers has been allowed to run rings round us and local democracy has been totally ignored.

“We just hope dear old Lock’s Hill has the final say and the house-builders realise they’ve been sold a ‘lemon’ and pursue another project that actually meets the needs of a local community and not on a much-loved greenfield site. We so desperately want to save Lock’s Hill and we won’t let it go without a fair hearing. That would be a travesty.”

If you would like to join the Save Lock’s Hill group on Facebook you can find it here.

Main image: Dan Stathers at the gateway into Lock's Hill on Derby Road

2 comments
Mrs
July 08, 2021
I am appalled to read in the Gazette today that the developers want to build 32 houses and that ONLY 4 will be so
called affordable. It is time the Council addressed the problem of houses being built mainly for incomers or second homes. What is the point of building on green land if it does not cater for local people.
GP
Gill Perkins
Report this comment Comments (0) | Was this comment helpful? 0 0
Save Locks Hill, Kingsbridge.
April 10, 2021
Dan's correct in all he knows and states about this precious wild green space, ancient in origin.
We maybe a Market Town and need customers for our high St...but, we need to preserve our old green spaces for our mental welfare! Look at Covid, and where we can walk locally!!
Plus, our local Schools are getting overcrowded, as will our local Surgery ( we already have very few G.P.s to look after too many Patients) plus other necessities like Dentists and Complementary health services.
Surely these are important considerations with over development?
If this plot and building was for young people to get onto the property market, and solely for affordable housing, then a more accessable plot elsewhere should be sought.
But, here lies the truth of our proposed building sites. The developers end up only having to build VERY FEW affordable houses. In the regulations!
This cut through is a dog walkers need from the Highfields, Waterpark Estate...already concrete congestion!
We are, if anyone has noticed in a Climate Change CRISIS...and yet...we propose even more building over precious fields and land! ***
We need to PRESERVE NATURE .....EVEN MORE....NOT DESTROY.....just so that Developer can march their greedy fingers to CAPITALIZE at our, the communities expense.