A six-year-old girl who saved her mum’s life has been named a “Local Morrisons Hero” after a nomination by a family friend.

Laila Williams, 6, from Ivybridge, kept calm and called her Nana when her mother, Claire Williams, was having a medical emergency at home on 22 April.

Morrisons in Kingsbridge had taken to social media to find their ‘Local Morrisons Heroes’ and Laila was nominated by Leah Jordan.

Talking about that fateful night, Laila explained: “Mummy was breathing too fast and panicking. She was really ill so I used her phone to call Nana, who called an ambulance.” 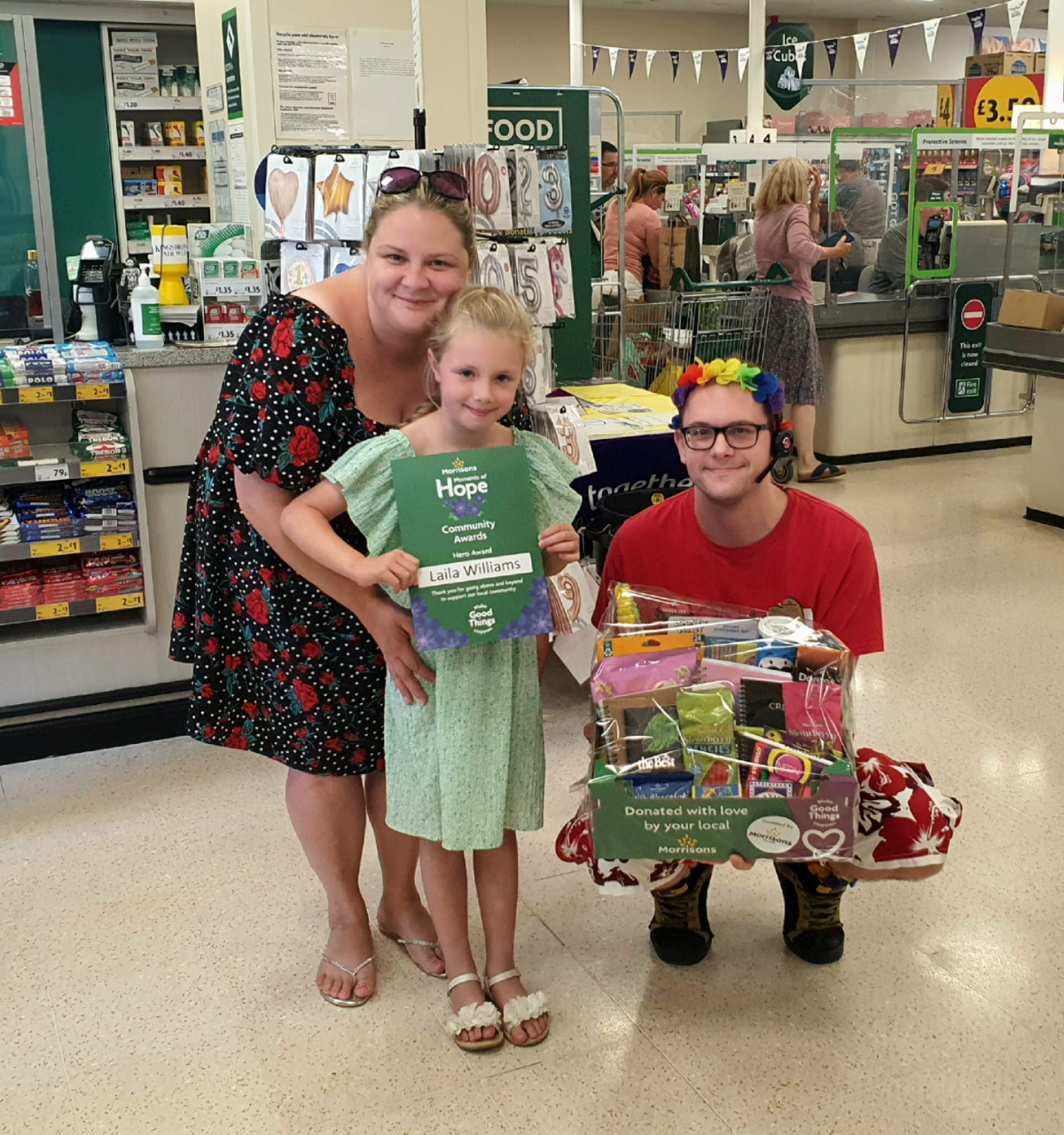 Laila Williams, with her mum Claire Williams, receives her box of goodies and certificate from Ben Holt, Morrisons Community Champion

Nana, Tina King, said that while Claire had blocked most of that evening out of her memory, she remembers it all too well.

“Laila rang me and told me that Mummy was really ill so I called the ambulance and then rushed round there. Laila stayed so calm and listened really well, not only did she call me but she had to open the door.

“She couldn’t open the chain on the front door because she wasn’t tall enough so she opened the back door so I could get in and wait with them for the ambulance, which arrived on blues and twos about 25 minutes later.”

Claire had had a traumatic birth with Laila and her uterus had attached to her bowel, so she has been in and out of hospital ever since. A perforated bowel meant her body was poisoning itself and she nearly got sepsis, time really was of the essence.

The ambulance crew spent a couple of hours stabilising her at home before taking her to hospital. “She sailed straight past waiting ambulances and was taken straight to the operating theatre at 4am”, Tina remembered.

Claire was rushed to hospital on the Friday night and was discharged the following Wednesday, a bit early but just in time to support Laila through her own operation as she had her tonsils removed a week after her heroics the following Friday.

“There is no doubt that she saved Claire’s life that day”, Tina explained, “Time was critical and we are all so proud of her.” 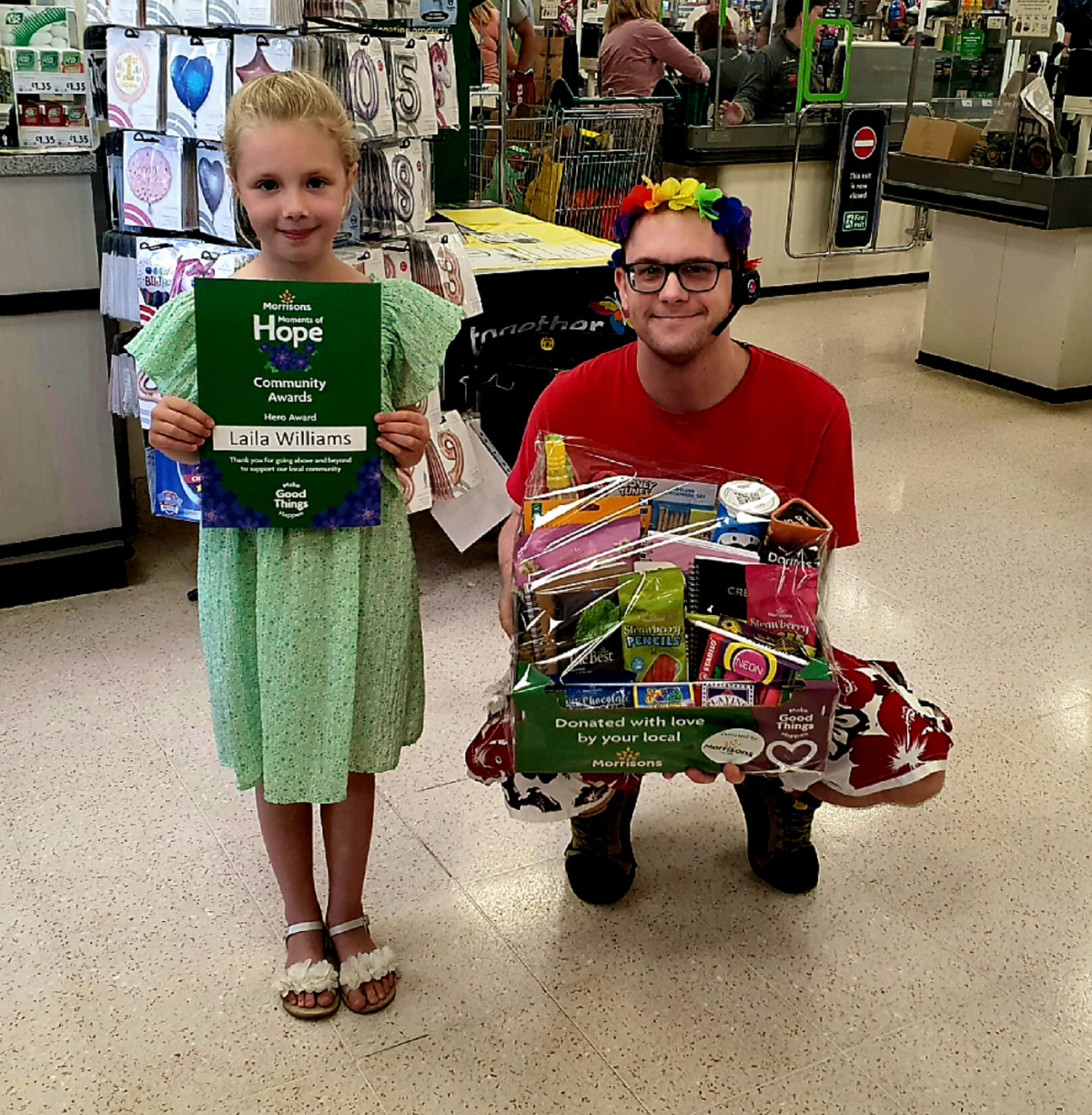 Laila Williams, with her mum Claire Williams, receives her box of goodies and certificate from Ben Holt, Morrisons Community Champion

Claire, Tina and Laila’s dad Steve were there to see her receive her rewards at Morrisons in Kingsbridge, where she got a certificate and a box of goodies.

Ben Holt, Morrisons Community Champion, said: “Morrisons wanted to celebrate our local heroes and Laila was nominated. I heard about her bravery and how she helped to save her mother's life by phoning for help at the age of just six-years-old so Laila had to be our local Morrisons Hero.

“When Laila came to collect her hamper, I could see how proud her family was of her. Well done Laila.”

Congratulations to Laila from all of us at SouthHams.com.