I am a friendly local craftsman with over 20 years experience.  Although my specia...

Salcombe RNLI crewmembers to be awarded for saving two lives

Members of Salcombe RNLI Lifeboat Crew are to receive Gallantry Awards for a rescue that saved two lives.

Salcombe RNLI lifeboat crew are to be honoured by the RNLI for a dramatic rescue of two people from a grounded yacht that took place in severe gale force winds in pitch black conditions.
Y Boat Helm Richard Clayton and Y Boat Crew Iain Dundas are both to be awarded a Bronze Medal for Gallantry for their boat-handling skill, tenacity, and bravery. Lifeboat Coxswain and mechanic Chris Winzar will receive a Thanks of the Institution inscribed on Vellum, for his professionalism, courage, and leadership under severe pressure. 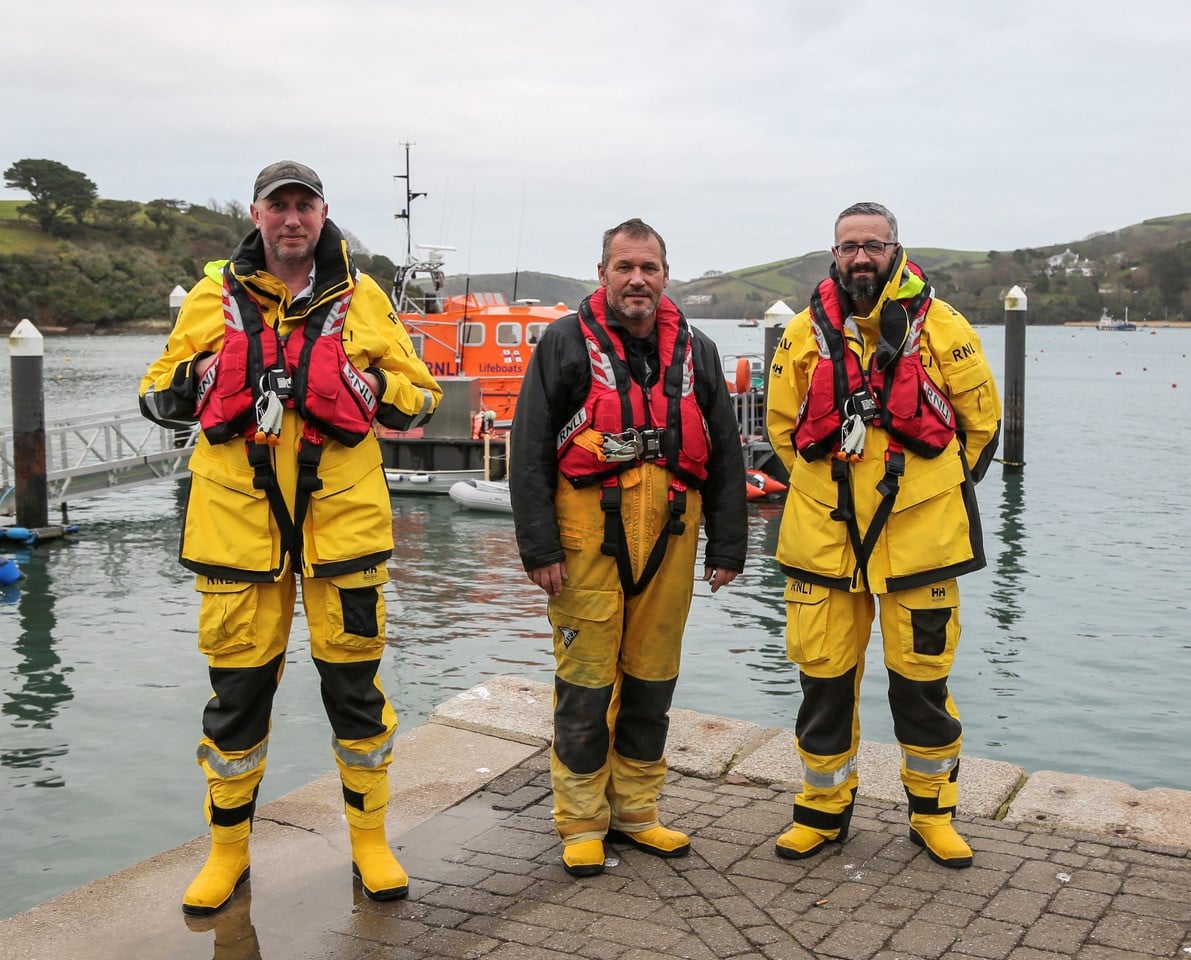 L-R: Y Boat Helm Richard Clayton, Salcombe RNLI Coxswain/Mechanic Chris Winzar, and Y Boat Crew Iain Dundas
A spokesperson for Salcombe RNLI explained: "The rescue of the two sailors took place during the early hours of December 21, 2020. The lifeboat was tasked at 4.05am to search for a small 25ft yacht reported to be aground north of Start Point with two people aboard. Conditions were extremely poor, with south westerly winds of 30-40 knots, large waves, an ebb tide, and poor visibility.
"Coastguard teams were tasked to search for the yacht from the cliffs; Rescue Helicopter 924 was also tasked but was unable to get close to the cliffs due to the dangerous up-drafts, driving rain and pitch-black conditions.
"After 30 minutes of searching, the sighting by Prawle Point Coastguard Cliff Rescue Team of a light below them helped the crew to be able to pinpoint the area to Nestley Point.
"The vessel was aground in a tight gully behind a tall outcrop of rocks, obscured from sight due to the pitch-black conditions and driving rain.
"The rocks were not visible and constant monitoring of the depth and position was imperative. Sea conditions on scene were slightly better due to the shelter given by the headland but there was still a 1.5 metre swell, and the wind was opposing the tide making the waves confused. The water was too shallow to allow the lifeboat closer than 40 metres from the shore.
"Salcombe RNLI Coxswain/Mechanic Chris Winzar knew that the situation was critical for the casualties as their yacht was at risk of breaking up and their lives in danger. The only option available was to attempt the rescue with the lifeboat’s smaller daughter craft (Y boat*) although it was incredibly risky in the severe conditions and on the limit of the boat’s capabilities.
"Chris discussed the option with his crew, and Deputy Second Coxswain Richard Clayton and crew member Iain Dundas both volunteered to attempt a rescue. This was a very high-risk strategy, any mishap with the Y boat would have catastrophic consequences, but the potential benefits outweighed those risks.
"With Deputy Second Coxswain Richard Clayton on the helm, the Y boat was launched from the heaving lifeboat into the squally conditions, and the volunteers headed towards the yacht, carefully negotiating off lying rocks and turbulent seas.
"Successfully traversing the short distance from the all-weather lifeboat, the crew now paused briefly, to monitor the breaking swells at the gully entrance carefully, before finally choosing their moment to commit to the approach.
"Using considerable boat handling skills to keep the Y boat on course and upright throughout, they entered the gully and approached the now semi-submerged bows of the yacht where the two casualties were eagerly awaiting rescue. A message was passed to the all-weather lifeboat to inform them that one of the casualties was unwell and both were very cold and scared.
"In the dim light provided by the Coastguard teams from the cliffs above, the two casualties were successfully recovered from the yacht, however with two extra on-board the 11ft long, 5ft wide Y boat, it would now demand considerable skill, determination, and courage to manoeuvre and bring such a laden boat with little power out of the gully.
"Once again, timing would be paramount but owing to the boat-handling skills and experience of the two volunteers this was safely achieved and the casualties recovered to the all-weather lifeboat, where they were given casualty care. The Y boat was recovered, and the lifeboat made its way back to Salcombe, arriving at around 7am. While a relatively short service, the conditions and situation had been intense."
The lifeboat crew were informed of the awards at their Christmas celebrations on Friday, 10 December, by Salcombe RNLI Lifeboat Operations Manager, Andrew Arthur.
Andrew said: "We are all extremely proud of our lifeboat crew for their incredibly brave actions that night. The RNLI does not give out awards for gallantry lightly and to receive these is a great privilege both for the individuals and the lifeboat station.
"This rescue was carried out in extremely challenging conditions and our crew demonstrated their unstinting commitment, boat handling skill, tenacity, leadership, and decisiveness, as well as immense courage, bravery and selflessness, which ultimately saved the lives of two people.
"It should be noted that, had there been a catastrophic failure of any kind, like an engine failure or capsize, both the Y boat and crew were at risk of being swept by the tidal stream towards an area of extremely rough and dangerous seas off Start Point.
"If this had occurred there would have been very little chance of a successful rescue of the two crew or the casualties on the yacht.
"It is this risk that made the decision to execute the rescue even more poignant, and the awards made all the more relevant. The decision made to go was a critical one, and one which would not have been taken lightly. It will be a great day when the crew members receive their honours in front of their proud families."
The RNLI Bronze Medals for Gallantry and the Institution’s Thanks on Vellum will be presented at a ceremony to held in early 2022.
*Y Boat is an "inflatable powered daughter boat housed under the aft deck, which can be deployed from a hinged door in the transom". You can find out more about Salcombe RNLI's lifeboats on their website: rnli.org/find-my-nearest/lifeboat-stations/salcombe-lifeboat-station/salcombe-lifeboats 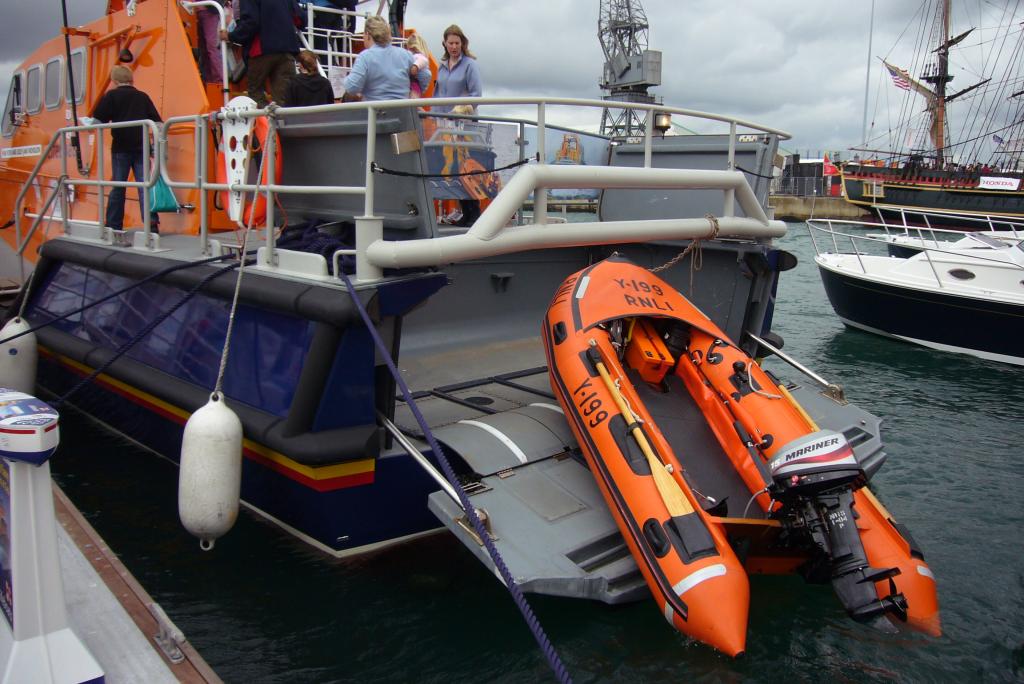 Taken at Southampton Boatshow, this photo shows the back of the Tamar class lifeboat where the Y class boat is stored. Credit Robert Kilpin.
Tweet