South Hams District Council has announced at its annual council meeting that its new chairman will be Cllr Lance Austen.

Cllr Austen, Ward Member for Ivybridge West, accepted the chain of office on Thursday, 19 May, from the outgoing chair, Cllr Richard Foss. 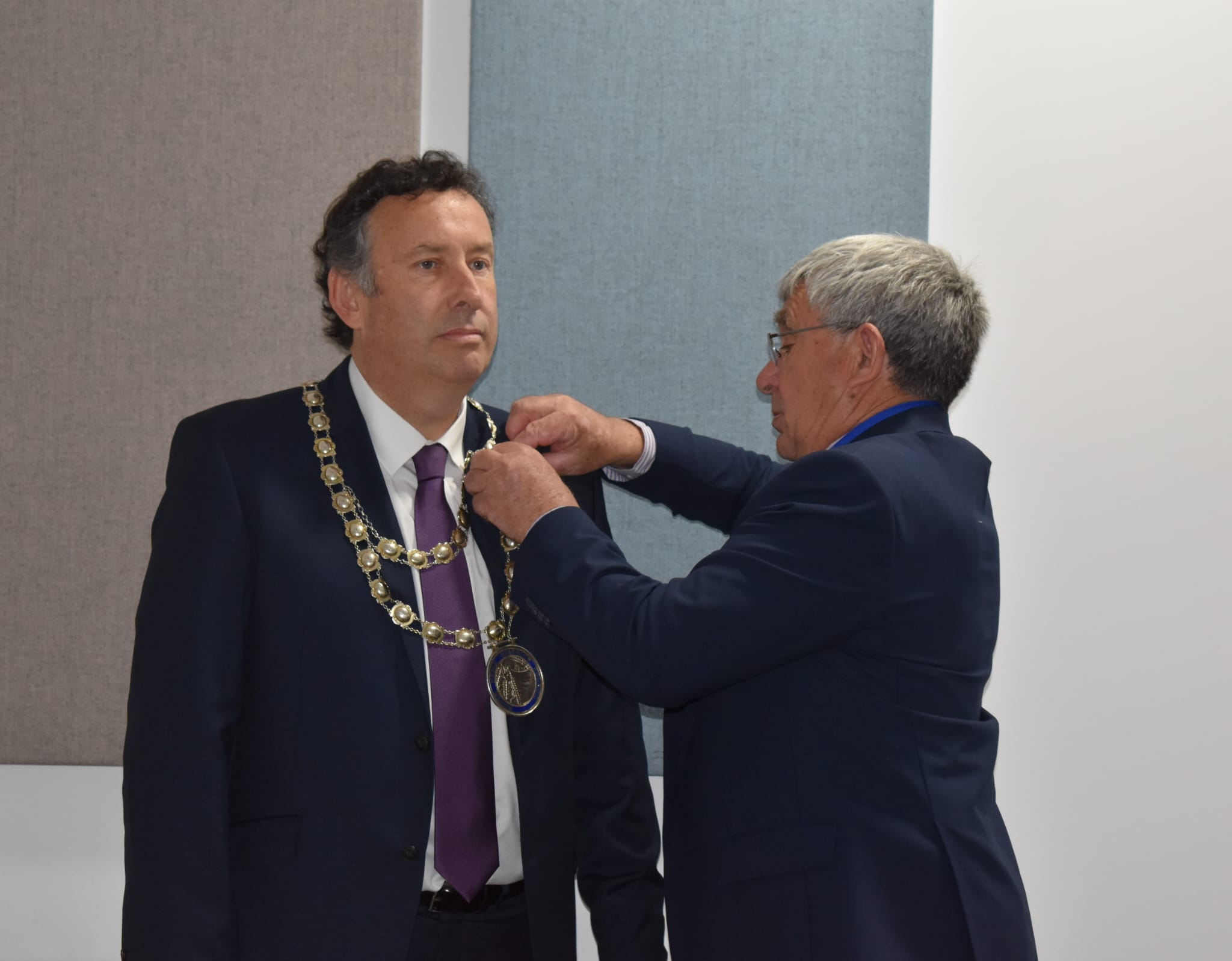 A resident of Ivybridge for over 25 years, Cllr Austen previously worked in business before lecturing in accountancy. Cllr Austen is married with two daughters and in his spare time, he enjoys walking on Dartmoor.

This is the second time Cllr Austen has been a councillor for South Hams District Council. He was first elected for a four-year period from 1999 to 2003 and was again re-elected to the Council in May 2019.

Cllr Austen has a lot of political experience and over his time as a councillor, he has been a member of many Council Committees including Audit, Development Management (Planning) and Overview and Scrutiny. He has enjoyed the role of vice chairman of the council since May 2021, supporting Cllr Foss in his position as chairman. 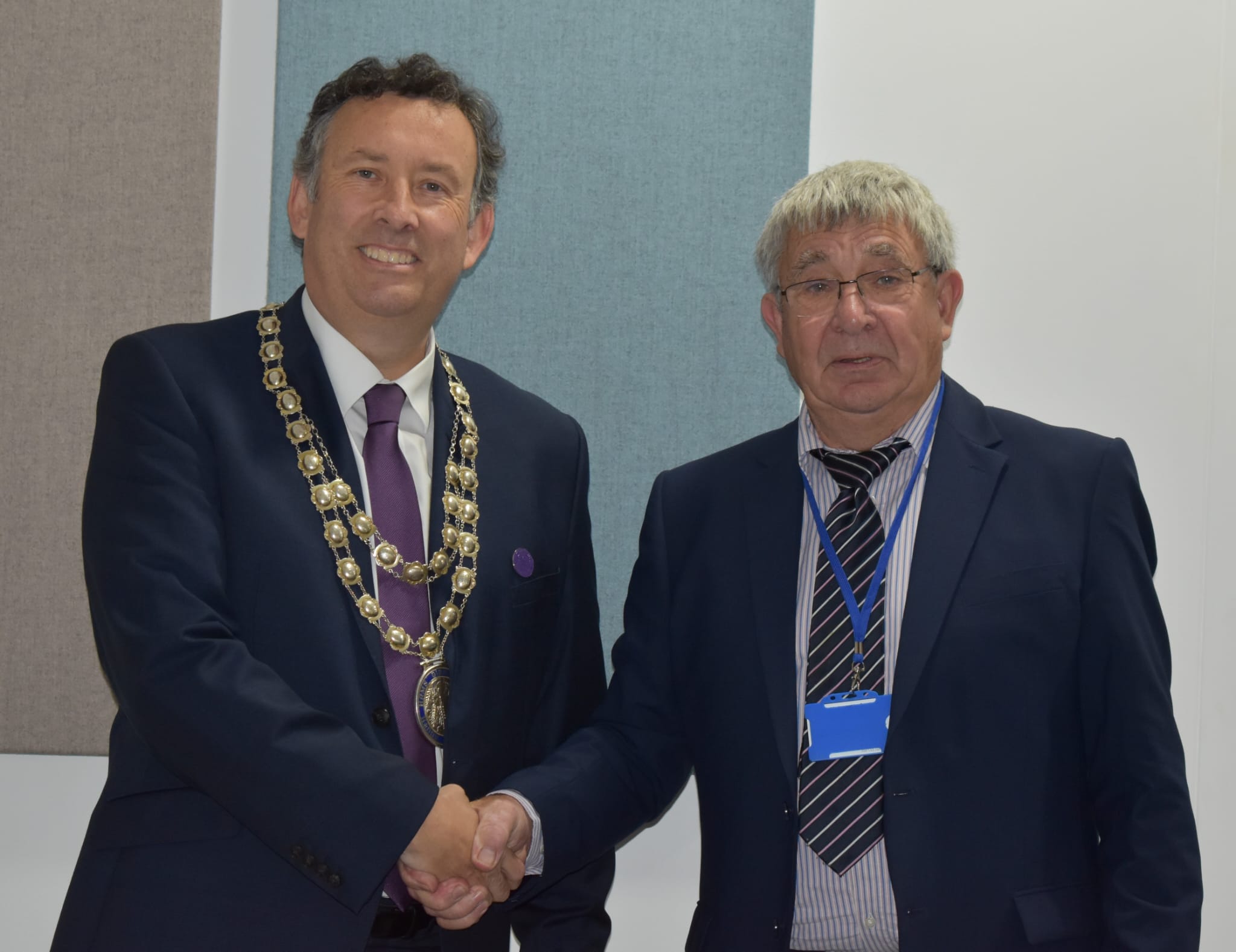 Receiving his chain of office, Cllr Austen said: “Can I start by saying that it is a real honour to be chairman of South Hams District Council.

“The last time I drove from Ivybridge to a full annual council meeting that was held in this chamber was on 16 May 2019, three years ago. In the last three years, the council has been through what can only be described as the most extraordinary time and there are members of the council that I would like to thank in particular for their work during this time.

“Cllr Rosemary Rowe was chair of the council in March 2020 when the Prime Minister announced that, “now is the time for everyone to stop non-essential contact and travel”. She chaired the council through Full Council, Zoom calls that had never been undertaken before. She then passed on the position to Cllr Richard Foss who has been an outstanding chairman over this last year.

“One year ago at the Full Council Annual Meeting, we were in Kilworthy Park in Tavistock with plastic screens covering the room. That is not an easy situation to chair a Full Council meeting in. It is a great credit to Cllr Foss and to Cllr Rowe that our meetings have run so well throughout this challenging time.

“Follaton House was used as a vaccination centre during the pandemic and this council chamber has been transformed in the last few years. My own view is that the council chamber is a now much better and more reflective of the modern council that South Hams is.

“The district council has administered 12 different business grant schemes on behalf of the Government over the last few years, paying out a total of £85.9million to businesses in the area. I know from my own ward in Ivybridge that these grants have been a lifeline for residents and businesses and have made a huge impact on the lives of many.

“Almost 20,000 individual grant awards were made to businesses across the various schemes. This has been an enormous undertaking by the council and its officers. At the start of the pandemic, we had no idea we would be asked to undertake this mammoth task and I would like to thank the officers on the council for their hard work and flexibility in adapting to that challenge.

“Finally, I would like to mention our current guests coming to the District from Ukraine. To date the Council has supported guests and hosts with welcome payments, support in applying for welfare benefits, national insurance assistance and help getting school places. We are providing free membership to our leisure centres and I am sure that over the next year we will see the demand for this assistance rise. With that in mind, I have decided to make the chairman’s charity this year the British Red Cross, Ukraine Crisis Appeal.

“I am looking forward to representing the council in the position of chairman over the coming year and would like to thank you again for this opportunity.”

Cllr Bernard Taylor, Ward Member for Charterlands was appointed as vice-chairman of the council.

The following committee positions were confirmed during the council meeting.

Retiring from his position of chairman, Cllr Richard Foss, said: “I have thoroughly enjoyed my year, in particular the debates at the council meetings which have been challenging due to the pandemic causing many issues.

“I thoroughly recommend anyone to take the chair if given the opportunity. I would like to thank the officers who have supported me and in particular the Chief Executive, and Leader, when at times matters raised have not been easy to resolve.

“On the civic side there have been a few functions that I have attended and again thoroughly enjoyed although tinged with a little sadness that my wife and long term sole mate was not by my side, the invite to the Lord High Admiral’s divisions at the Dartmouth Royal Naval College was the highlight of the year.

“I would like to thank all those who have contributed to my charities the Devon Air Ambulance and Cancer research raising £1,603.00. I would like to dedicate this amount to my wife Judy, who in the past has raised many tens of thousand pounds for these charities.

“Finally, I hope that Cllr Lance Austen enjoys his year as much as I have.”

To watch the Annual Council and to see other appointments to committees made during this meeting, go to: www.youtube.com/user/SouthHamsCouncil