The mother of a six-month-old baby wants to bring attention to the reason he is currently wearing a helmet.

Georgie Clark is sharing her son’s story in hopes of normalising it and preventing the strange looks when she is in public with her baby.

Noah was born in May and due to a couple of complications, he spent five days in NiCU during the pandemic. During that time he struggled with feeding and was dealing with a cow’s milk protein allergy and reflux.

Georgie explained: “At around six weeks old, I noticed Noah had a little dent or ridge on the back of his head. After consulting with the GP, nurse and health visitor, I was simply told to ignore it, that it would go away in time and ‘pop back out’. No referrals to a physio or specialist were offered.

“Unfortunately, as I had to hold him upright for pretty much 24 hours a day, due to the severe reflux he had and choking risk if he lay down flat, the back of his head was in constant contact with my arm and as a result the ridge turned into a flattening and widening of his head on the sides and top (brachycephaly).

“I asked the GP again and a consultant at the hospital but was told again to just ignore it.” 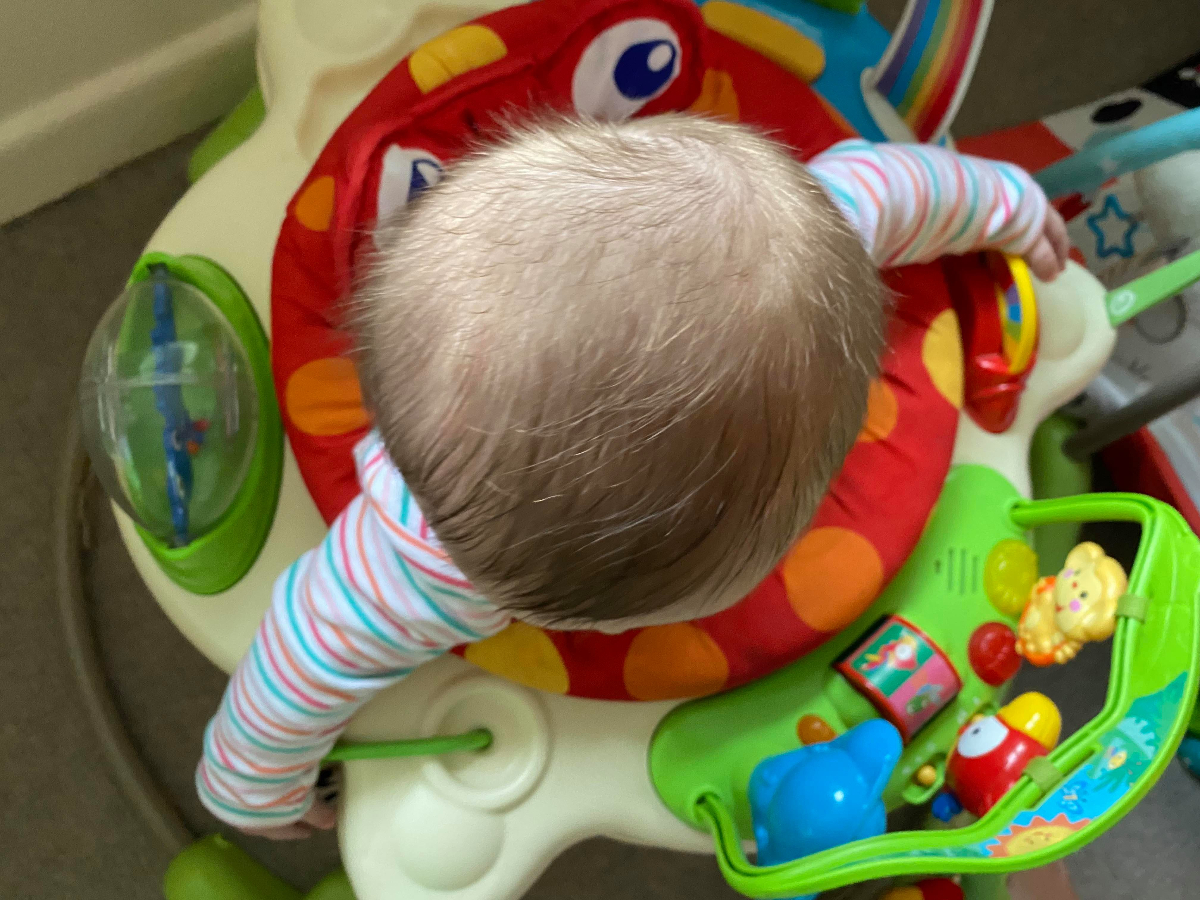 Although Georgie said she appreciates the work the NHS do, she said there are “gaps and inconsistencies” and she felt “very unsupported and like my baby was broken and no one wanted to help”.

She said: “After spending weeks researching, I discovered that the NHS only provides physiotherapy support and repositioning techniques (encouraging babies to lay on their sides instead of the back of the head) which were not offered to me by any of those I sought help from.

“They do not recommend or provide helmet therapy treatment as they see all types of flat head syndrome as a cosmetic only issue, and so our only option was to explore Helmet Therapy privately.

“Knowing that helmet therapy is extremely common in America and other countries, I thought it must be safe and effective but still researched further to ensure it would work and Noah wouldn’t be affected negatively in any way.”

It was during this search for support that she found Lisa at Align Clinics UK, “ she immediately explained everything I needed to know, answered all of my questions and gave me a lot of advice” Georgie said.

She continued: “She looked at photographs and agreed that Noah’s case was serious. It took a little while to be 100 per cent sure that this was the right decision for us and to also secure the finances as the treatment is in excess of £2,000 (plus travel costs).

“We met with Lisa at her clinic in Cardiff and immediately felt in safe hands. She took measurements of Noah’s head and my worst fears were realised, if nothing changed he wouldn’t be able to wear a helmet to learn to ride a bike, career options would be limited as a lot of professions require some sort of hat or helmet (fireman, police officer, builder) or even wear normal glasses due to asymmetry of his ears.

“His case was off the scale of severity and he would need to wear the helmet 23 hours a day for 7-8 months to get the best possible result, with monthly visits to either the Cardiff or Bristol clinic for check ups.”

Lisa at Align Clinics not only knows how to support parents from a clinical standpoint but also a parental one, with her own son who has also undergone helmet therapy.

Lisa with her own son and his helmet

Lisa explained how the helmet works, saying: “Each helmet is custom made for each little one. I take a scan of the little one’s head, and prescribe modifications corresponding to the flattened areas to create the initial head mould.

“The helmet (The Boston Band) is then manufactured by Boston O&P in America and shipped over to me within two weeks.

“It is literally the reverse physics of how the flattening happens in the first instance. There is no ‘pushing’, ‘pulling’, or ‘forcing’ and it certainly does not give the little one any pain or discomfort.” 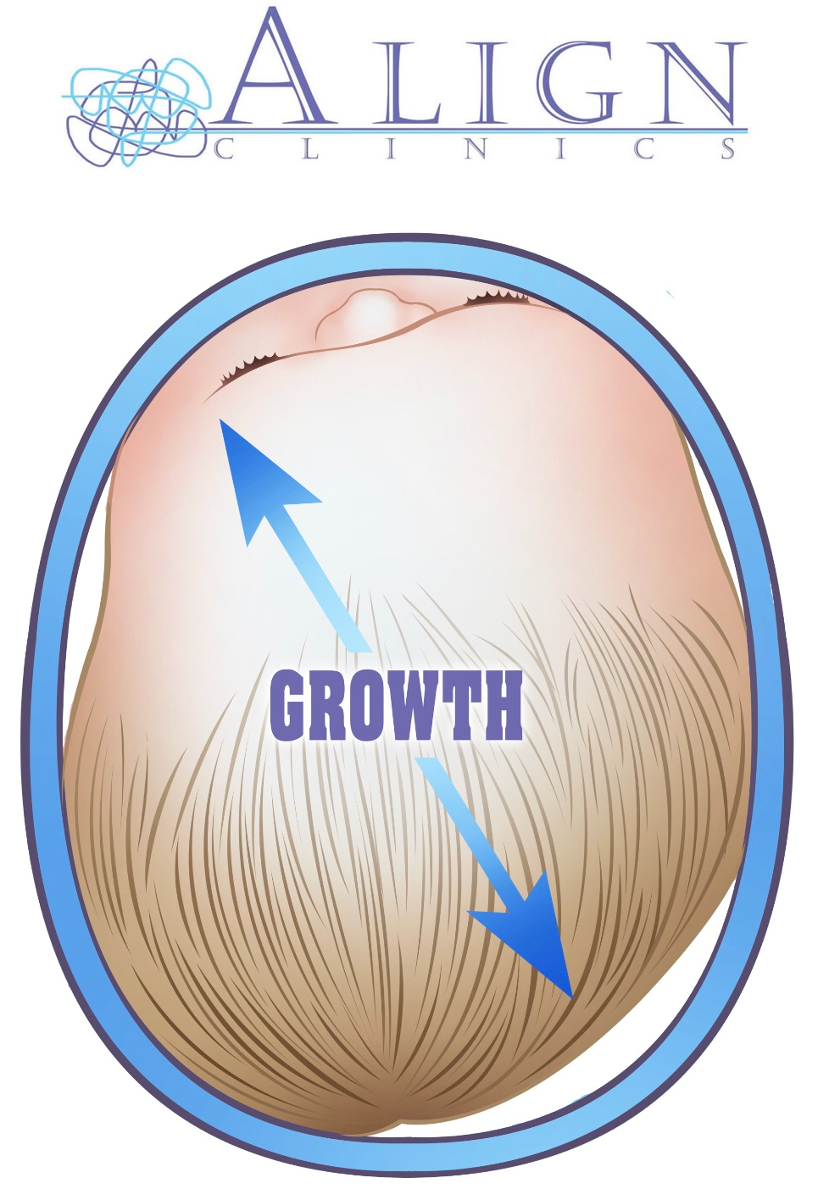 An illustration of how the helmet works - Align Clinics

Noah has been diagnosed with “significantly severe Brachycephaly and moderate right side Plagiocephaly”. Lisa explained: “Brachycephaly is where the external force holds the growth at the back of the head.  Instead of the brain and skull growing here, it grows where it is least resistant, which in the case of brachycephaly, is up and over the forehead, creating a wide, large forehead position.

“It also can flex out the temporal lobes each side just above the ears.  So you can get lumps / bumps here, again broadening the head position. 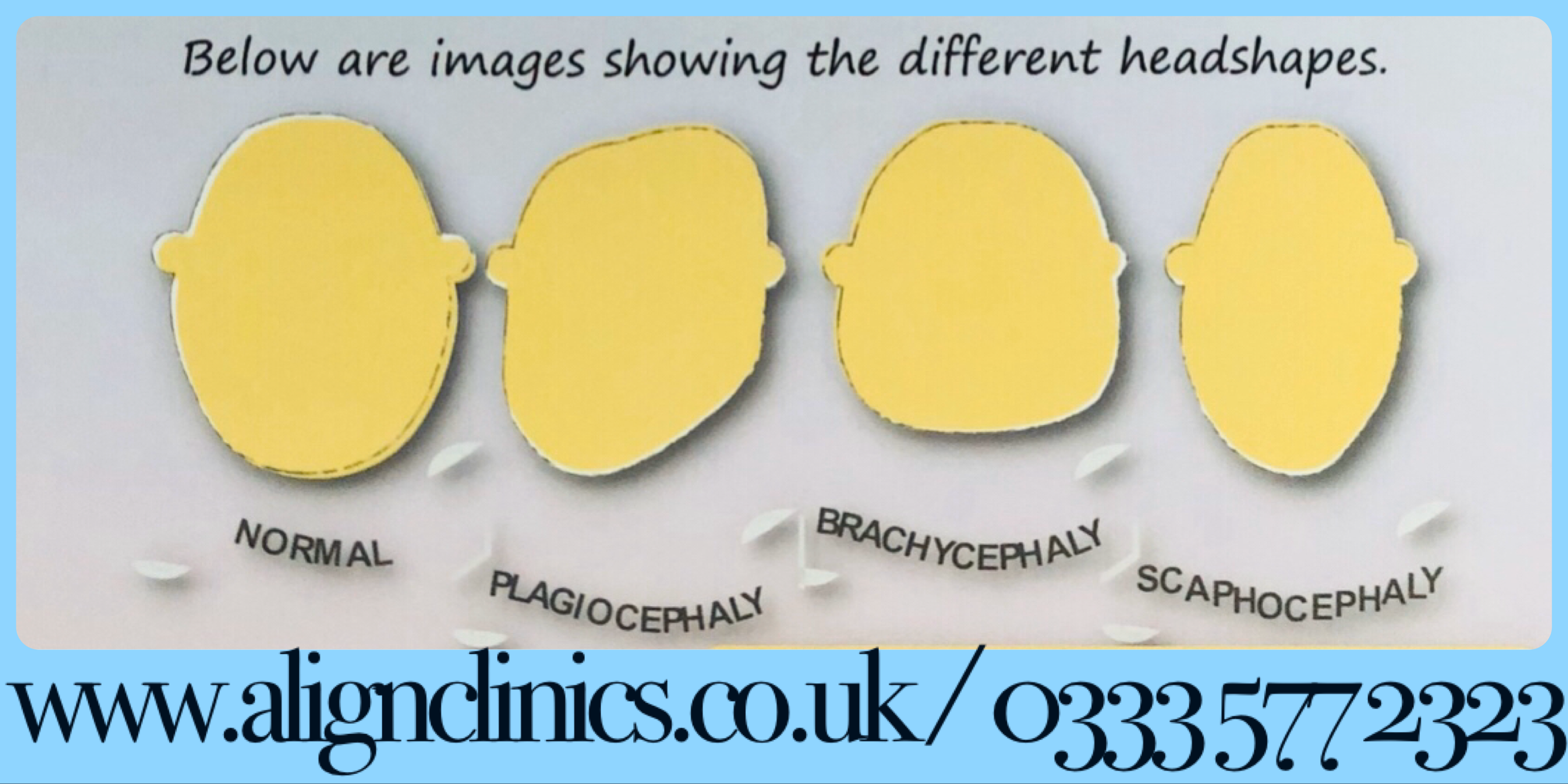 “A significantly severe head shape such as Noah’s is where the head shape is actually wider than it is long.

“Although ‘only’ cosmetic this causes huge implications to the wearing of cycle helmets, horse riding helmets and glasses.  It has also been pointed out to me by adults who actually have flat head syndrome that it can have an impact on their career as PPE hard hats do not fit them safely.  So could have complications with any career which requires the use of a hat.

“A lot of parents who come to see me are so, so, concerned about the mental health aspect of not treating flat head syndrome as they worry about their little ones being bullied later on in life.

“The right side plagiocephaly is when the external force holds the growth on the one large parietal lobe on the back right side of the head.

“It can also shift the zygomatic bone forwards which makes the right cheek appear larger than the left cheek as well as making the right eye appear bigger and a different shape than the left.  In very severe cases, it can shift forwards the right side of the jaw which then alters a little one’s jaw line and bite.” 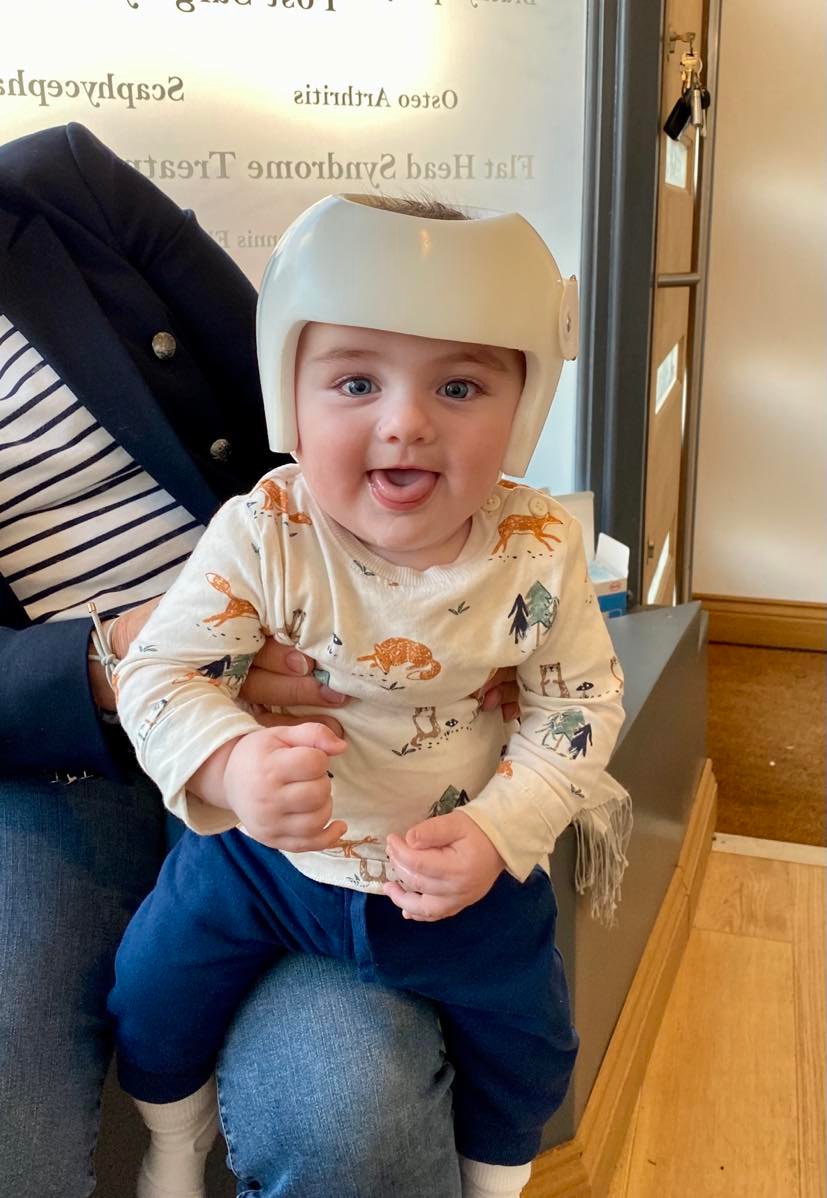 Georgie said that a week into the start of his helmet treatment, little Noah doesn’t seem to notice the helmet at all, although she is having to keep a close eye on his temperature as it is “like wearing a hat all the time”. “You may see us out and about with no socks on in the middle of winter!”, she laughed.

Georgie wanted to share Noah’s helmet story in order for people to understand why he wears it and therefore for them to be met with less stares from strangers. 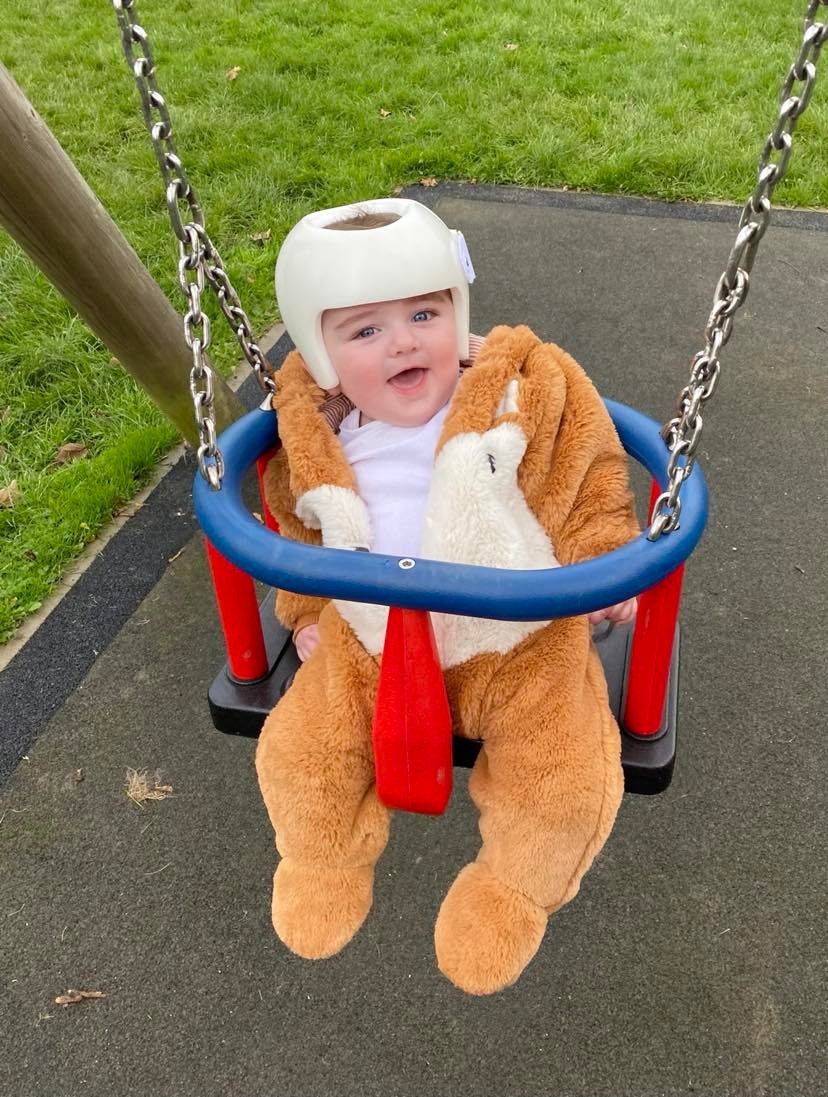 Noah enjoying a go on the swing with his helmet on

She said: “We have been out in Kingsbridge and most people have been lovely as he tends to smile at everyone, but we have had some quite rude stares and a bit of pointing when they think I am not looking. We would be more than happy to explain if anyone asked.

“I would like to encourage any parent, carer or guardian to do their research and to contact Lisa at Align if they have any concerns. Also, push your GP or health visitor for a physiotherapy referral as repositioning techniques can help if started early enough.

“I completely understand that our NHS is already stretched but I find it terribly upsetting as a parent that they are failing to understand the long term effect this could have on a child, and as treatment is only successful if done at a very early age, then it really is a matter of now or never. 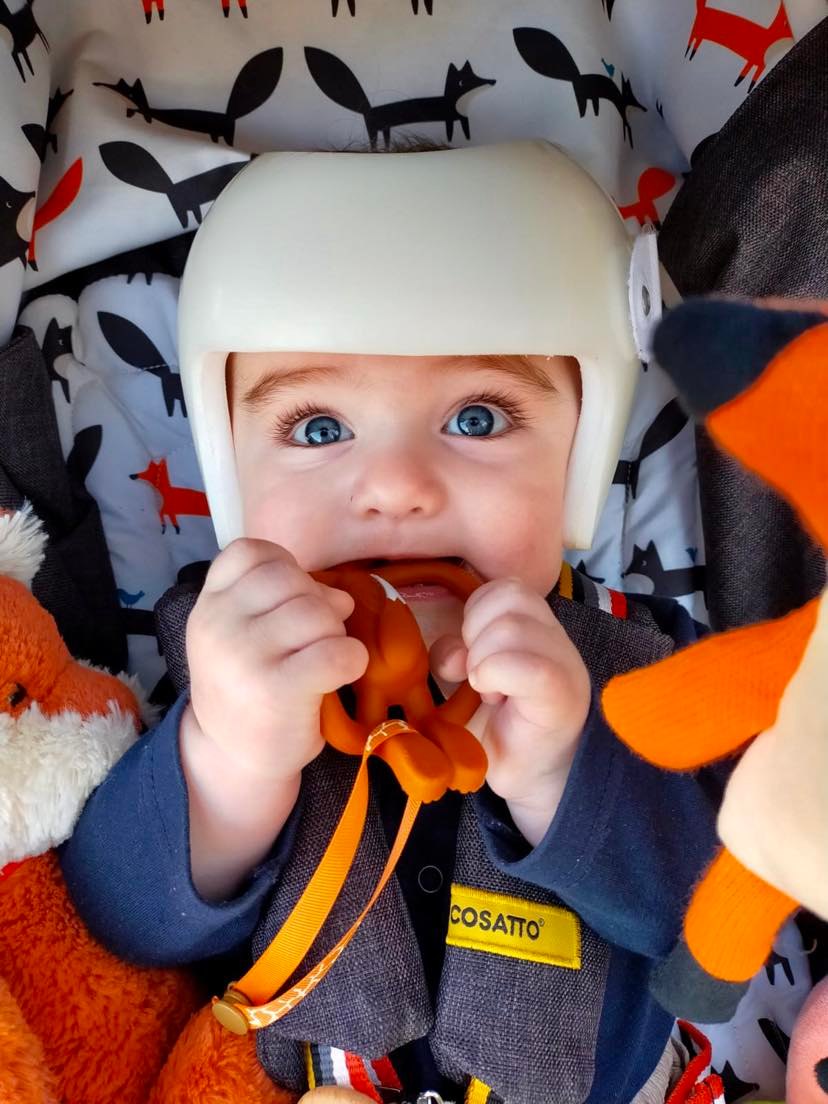 I couldn’t face the thought of my little boy being picked on and having to make sacrifices or compromises over something that can so easily be fixed. I know he will be so grateful in the future and I am so thankful to those family and friends who have supported us.”

According to the NHS website, plagiocephaly and brachycephaly can be quite common, occurring in as many as one in five babies at some point. The website states: “In most cases they aren't a major cause for concern, as they don't have any effect on the brain and the head shape will often improve by itself over time.” However if you have concerns, contact your GP and if you would like to contact Lisa at Align Clinics, visit her website: HERE.