Remembrance Services 2022 - where is your local event?

As always, Remembrance Day is remembering the lives given by our grandparents and great-grandparents generation during the First and Second World War, but this year the Royal British Legion is marking the 40th anniversary of the Falklands Conflict and the 78th anniversary of D-Day, as well as Commonwealth Day, South Asian Heritage Month and Black History Month.

I recently read an article about the Unknown Soldier and it reminded me of the sadness and heartbreak that comes from war.

The Unknown Soldier was one of four unknown soldiers recovered from four battle areas, the Aisne, the Somme, Arras and Ypres. Brigadier General LJ Wyatt and Colonel Gell went into the St. Pol chapel, where the bodies on stretchers were covered by Union Flags, alone.

They had no idea from which area the bodies had come. Brigadier Wyatt selected one and the two officers placed it in a plain coffin and sealed it. The other three bodies were reburied.

The Unknown Warrior was buried at Westminster Abbey, with the idea that for all of those families or those who lost their loved ones in the trenches and in the no man’s land of the battlefield, never to know where or how their sons, husbands, fathers or brothers died, could believe that the Unknown Warrior was their warrior, and take comfort in them being laid to rest beside Kings, rather than in the tragic mud of a near but foreign country.

“My friend, you would not tell with such high zest
To children ardent for some desperate glory,
The old Lie: Dulce et decorum est
Pro patria mori.” 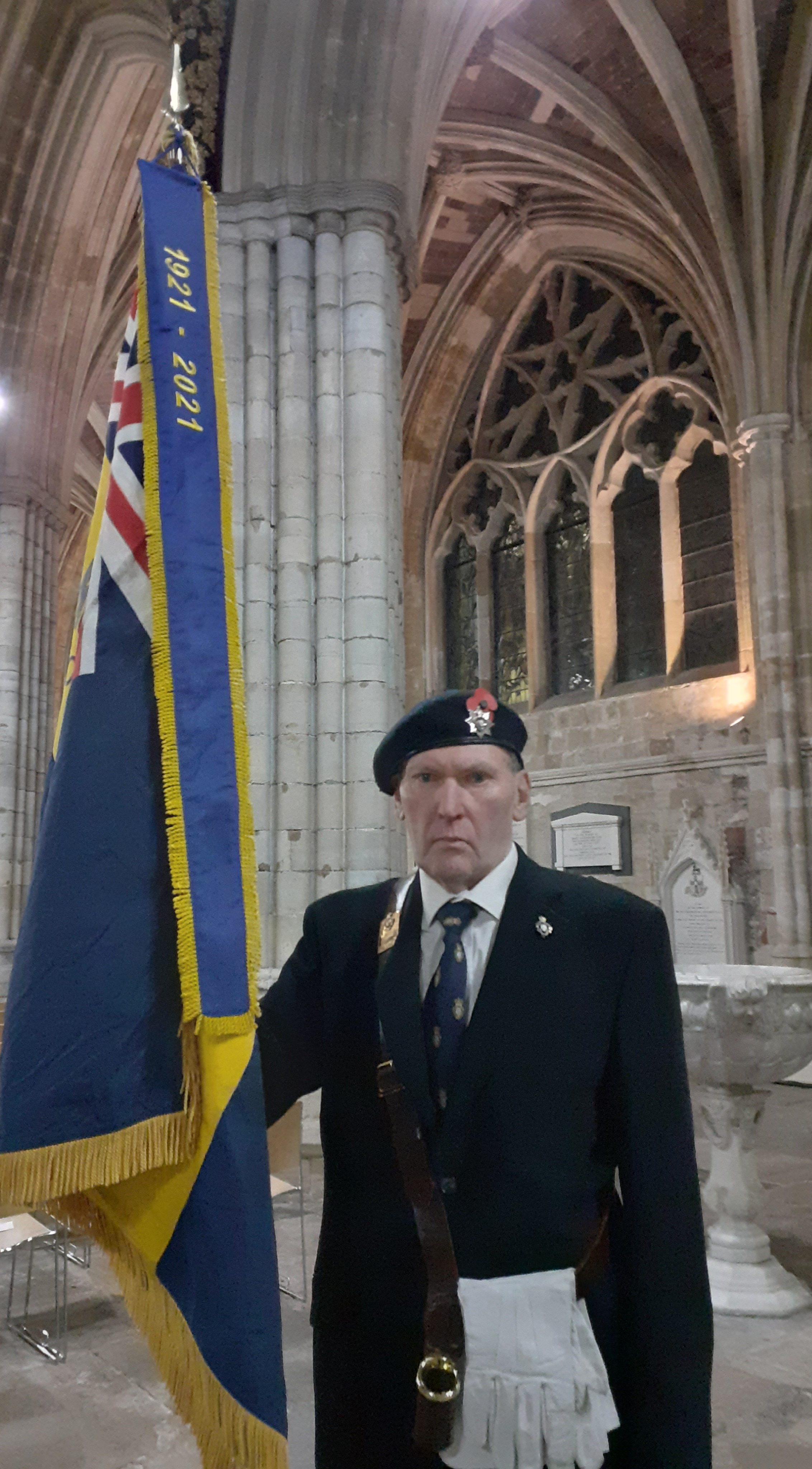 Totnes Royal British Legion: Standard Bearer Steve Spencer with the Totnes Standard and the new pennant. This was issued on the 100th anniversary of the formation of the Totnes Branch in 1921.

Kingsbridge Royal British Legion, local community groups and organisations are mustering on the Town Square on Sunday, November 13, at 10.30am and marching to the War Memorial at 10.45am for a short service conducted by Reverend Matt Gorton.

This will be followed by wreath laying by groups and organisations.

The Britannia Royal Naval College Volunteer Band will be at the Avenue Gardens Bandstand from 10.15am to provide musical accompaniment whilst the parade musters and as part of the event thereafter.
Marshals will be on hand and attendees will be allocated to a muster point. The Act of Remembrance will commence at 10.55am. There will then be a wreath laying by groups and organisations.

Following the Act of Remembrance, there will then be a church service at St Saviours Church.

The parade at Salcombe is as usual with all mustering about 10.30am on Sunday, 13 November, at Whitestrand car park to prepare to march to the memorial where there will be a short service by Rev’d Christian Hill. There will then be a wreath laying by groups and organisations..

This year there will be five representatives from HMS Magpie in attendance as well as the Lady Sponsor, Lady Teresa Gardner.

On Remembrance Sunday, 13 November, there will be a wreath laying service at 10.45am at war Memorial followed by church service at St Mary's.

Poppies are on sale in the Methodist Church from 10am to 1pm, Monday to Saturday, with coffee and cakes on the Saturdays.

A Remembrance Day Parade will be held on Sunday, 13 November. Attendees will muster at Ivybridge Motors at 10.30am and will be led by the Plymouth Pipe Band from 10.50am until they reach the war memorial at 10.55am.

A service will be led by Reverend Paul Hinckley, St Johns Chaplain, and the Last Post will be performed at 11am. There will then be a wreath laying by local groups and organisations.